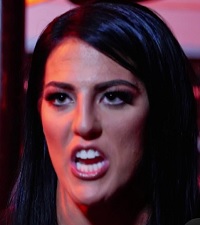 Tessa Blanchard, a third-generation wrestling superstar, will discuss her drive to reclaim the Knockouts Championship on Thursday, May 23, on the IMPACT Wrestling Press Pass Podcast.

Tessa will join hosts Josh Mathews and Ross Forman to reflect on her Rebellion pay-per-view match against Gail Kim, which featured her dad (former wrestler Tully Blanchard) sitting ringside. Tessa is the granddaughter of late wrestler Joe Blanchard and is the stepdaughter of Magnum TA.

Tessa has been wrestling since 2014 and was the Knockouts Champion for about five months in 2018 before losing the title to Taya Valkyrie in early-January.