[1988] – The inaugural “Royal Rumble” was at the Copps Coliseum in Hamilton, Ontario, Canada, and was won by “Hacksaw” Jim Duggan. At the event, Canada’s own, Dino Bravo attempted to break the world bench press record. Also, Hulk Hogan and Andre the Giant signed the contract that would ultimately lead to the end of “Hulkamania.”

[1989] – 1989 was the first year the “Royal Rumble” was held on Pay-Per-View. In the night’s main attraction, Big John Studd last eliminated Ted DiBiase to be declared the victor. Also, Haku and Harley Race battled for the King’s Crown.

[1991] – The Miami Arena played host to the 1991 “Royal Rumble.” Hulk Hogan made it back-to-back “Royal Rumble” victories in 1991, last eliminating Earthquake. Also on the card, American turncoat Sgt. Slaughter defeated the Ultimate Warrior for the World Wrestling Federation Championship. In addition, Ted DiBiase and Virgil teamed up to take on the Rhodes — Dusty and Dustin.

[1992] – In one of the most memorable “Royal Rumble” events, Ric Flair outlasted 29 other superstars to win the 1992 Rumble, and the then-vacant World Wrestling Federation Championship. Earlier in the evening, Rowdy Roddy Piper got his first taste of Federation gold when he defeated the Mountie for the Intercontinental title. Also, the Legion of Doom defended their Tag Team Championship against the Natural Disasters.

[1994] – The 1994 “Royal Rumble” was perhaps the most controversial ever. In the end, it was both Bret Hart and Lex Luger going over the top rope at the same time. Therefore, co-winners were declared by then-president Jack Tunney. In a memorable Casket Match, Yokozuna defeated the Undertaker. Also on the card, Razor Ramon successfully defended his Intercontinental Championship against Irwin R. Schyster.

[1995] – In 1995, Shawn Michaels last eliminated Davey Boy Smith, and was awarded a match against World Wrestling Federation Champion Diesel at “WrestleMania XI.” Also at the 1995 “Royal Rumble,” the 1-2-3 Kid and Bob Holly defeated Bam Bam Bigelow and Tatanka in a tournament final to capture the Tag Team Championship. After the match, a frustrated Bigelow assaulted Lawrence Taylor, who was watching the show alongside the other Federation fans.

[1996] – Shawn Michaels made it back-to-back “Royal Rumble” victories in 1996. He later went on to defeat Bret Hart for the Federation Championship at “WrestleMania XII.” In addition, an overzealous Jeff Jarrett was disqualified in his match against Ahmed Johnson when he destroyed his guitar over Johnson’s head. Also, Goldust captured the Intercontinental Championship when he pinned Razor Ramon’s shoulders to the mat.

[1998] – Stone Cold Steve Austin outlasted 29 other men to win the 1998 “Royal Rumble.” He later went on to defeat Shawn Michaels at “WrestleMania XIV” for the Federation Championship. Also in 1998, Vader defeated Goldust, who was accompanied to the ring by Luna and Rocky Maivia successfully defended his Intercontinental Championship against Ken Shamrock.

[1999] – The unthinkable happened at the 1999 “Royal Rumble” when Vince McMahon last eliminated Stone Cold Steve Austin to win the Rumble. McMahon was later stripped of his WrestleMania Championship Match by Commissioner Michaels. Also on the card, Gangrel battled X-Pac for the European Championship, Billy Gunn challenged Intercontinental Champion Ken Shamrock and much more. 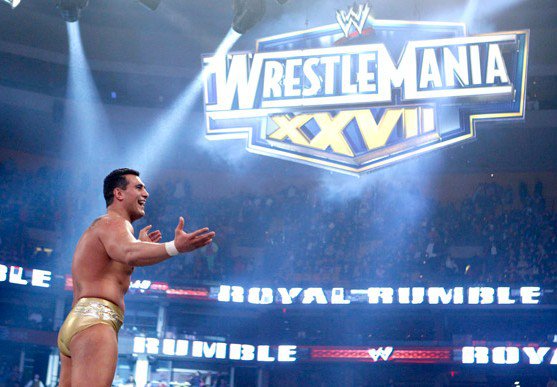 *both Hart and Luger’s feet touched the mat on the outside at the same time, and Vince McMahon ruled both men as winners. Hart and Luger both would vie for the WWF Title at Wrestlemania X, in seperate matches.