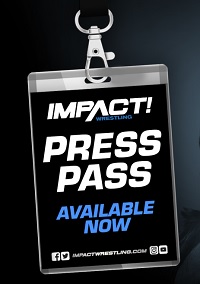 “Walking Weapon” Josh Alexander will be one of the special guests on the weekly IMPACT Wrestling Press Pass Podcast.

Press Pass hosts Josh Mathews and Ross Forman will kick off the Podcast with updates on major upcoming IMPACT Wrestling shows, including United We Stand on April 4 in New Jersey and the Rebellion pay-per-view on April 28 in Toronto. Mathews also will have news about Sami Callihan. who confirmed on Feb. 25 that he signed a new multi-year deal to remain with IMPACT Wrestling.

Alexander was offered, and accepted, a three-year contract this past weekend from IMPACT Executive Vice-President Scott D’Amore. Alexander had been considered one of the best free agents on the market, until D’Amore gave him the IMPACT contract at a Destiny Wrestling event in Canada. Alexander is best known for his work with AAW, PWG, and AIW.