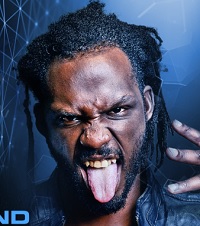 The highly-anticipated IMPACT Wrestling debut of Rich Swann is set for this Thursday night when Impact! originates, for the first time ever, from Windsor, Ontario, Canada.

But before we see Swann in the IMPACT ring against Trevor Lee, Swann will answer questions as the special guest on the IMPACT Wrestling Media Teleconference.

Swann has been wrestling for 10 years, a champion around the world in both singles and tag-team action. His energetic, high-flying style has shined in numerous promotions.

Swann certainly will seek championship gold in IMPACT, and he can set his sights on the World Championship now held by Austin Aries or the X-Division Championship held by Matt Sydal.

Swann’s daredevil, in-ring approach is second to none.

Next up for IMPACT Wrestling is Slammiversary, which will be held July 22 in Toronto and air live on pay-per-view … and no doubt Swann will be in the spotlight that night, too.