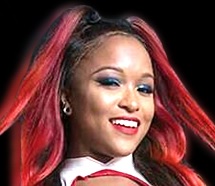 Two rising stars, Rohit Raju and Kiera Hogan, will be the special guests on the weekly IMPACT Wrestling Media Teleconference.

Hogan had a Redemption battle with Taya Valkyrie and has plenty to share about that one-on-one fight, and all things brewing in the Knockouts Division.

Raju is the winner of the 2017 Global Forged competition, and he’s ready to shine in 2018 and beyond. Raju has competed for years on the independent scene across North America and now primed for IMPACT stardom. Raju’s grandfather was from India and Raju, hailing from the southern Indian city of Hyderabad, is looking to represent his heritage in front of the world.

Raju is poised for success along with the Desi Hit Squad.

Plan your questions now as Kiera Hogan and Rohit Raju inform on their promising futures.

Here is the pertinent information:

Redemption PPV, which was April 22 in Orlando;
The Road to Slammiversary, which will be July 22 in Toronto;
Championship Gold – past, present and future;
Wrestling idols for each;
That name, Hogan;
Breaking into the business;
Hogan on her mini-golf in Orlando as part of the VIP Package;
Raju on the Desi Hit Squad;
Who does Hogan’s bright, multi-colored hair;
All-time favorite wrestlers; and
The IMPACT Locker Rooms.