Mickie James on Being a Mom & a Wrestler, If She Would Like to Work a Regular Schedule, More 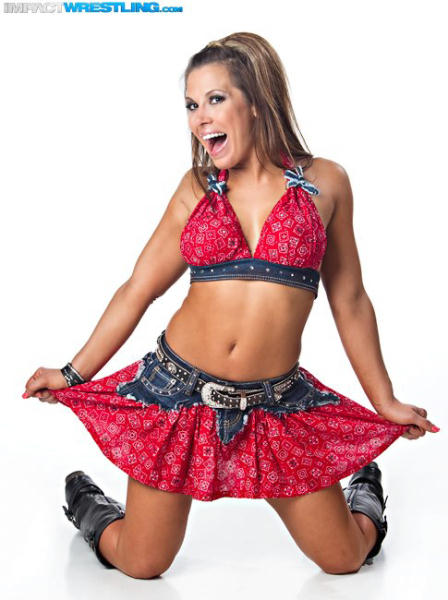 Former WWE Divas Champion and TNA Knockouts Champion Mickie James talks with Brian Fritz of BetweenTheRopes.com about appearing at WrestleCon 2015 on March 27 and 28 in San Jose, being around her friends including Ric Flair, being a mom now and a wrestler, how she looks at her career now going forward, how close she came to retiring from the ring, her recent return to TNA in Glascow, if she would like to wrestle full-time again and possible for the WWE, the #GiveDivasAChance movement and women in wrestling right now, her memories of WrestleMania 22 against Trish Stratus, the “memorable moment” during that match and the reaction it got from Vince McMahon and more.

On being a mom and a wrestler:

It’s a massive change right? One thing for me, and this is probably true for a lot of people and especially for women in this industry, it’s like one of those things, for me, I spent the last 15 years prior to having Donovan focusing on me and what I’m going to do and how am I going to make it? What do i have to to to achieve my goals and what do I want in life? That whole want do I want has gone out the window. Obviously, you still work towards your goals but my vision is completely centered on what is going to be best for him and what can I do to provide for him, the life that I want him to have. It’s a bit grounding in a sense because it’s changed the way I make my decisions like is this worth it? What’s going to be the best thing at the end of the day? So that’s kind of crazy. And I wasn’t even, at first, considering getting back in the ring really because I was like, you know, is it too much and you have to be on the road. But he loves it. It’s crazy. I only do shows on the weekend here and there and we travel I always have to have someone go with me whether it’s my mom or my sister or my grandma who loves it. He loves wrestling which is frightening to me. We watch it on TV and I think it’s the colors and the costumes and the action but he is absolutely fascinated by it.

On how close she came to stop wrestling after having her son:

I think it was one of those things of, really when I kind of found out because at that time my whole focus at that point was … because I had left TNA and I was a free agent. I had some talks with WWE and my hope was to perhaps maybe go back to WWE and do something there. I had been working diligently towards that and when I found out I was already two months along and had no idea. I had gotten in really great shape, New Year’s resolutions and I was getting shredded and was like ‘this is great’. I was making positive momentum and really doing good and then I was like ‘oh, well what am I going to do now?’. This is all I know. This is the only life I’ve known. My life for the last 15 years is being a road warrior and being a star of sorts. Sometimes a little brighter than others. I think at that point I was like how am I going to do this? Maybe this is it. Maybe that was my … I have been very blessed to have an amazing career, one that a lot of people would strive to have. So, should I just be grateful for the fact that I have achieved these goals and done these things that I wanted to do and got to do in my life and OK, it’s for the next chapter? Luckily, I had so much time to sit back and think about it because I really couldn’t do much else except for things around the house. I really had to think what I wanted to do because this is such a cosmetic business as well. The more I thought about it, I thought there’s all these actors and models and they come back and still do their thing after they have a kid. Nothing’s impossible.

If she would like to go back to a regular schedule with a promotion:

I guess I’d have to think about that if that opportunity presented itself with WWE or TNA. Obviously, TNA’s schedule is much lighter as far as television’s and they’re not doing a ton of house shows right now. To go back on the road full time … at the height of my career I was on the road probably 250 days out of the year at least. I don’t know unless I had a nanny with me on the road full time, I don’t know if I could do that.