GERWECK.NET: Could you give us some background information?

GERWECK.NET: Who were you trained by?

Raegan Fire: I started training at the Team Vision Dojo in Orlando when I was 16 and have trained there ever since. We have had many people come in for seminars and people that have helped train all of us.

GERWECK.NET: When was your debut match?

Raegan Fire: My debut was against Santana Garrett on 7/16/16 @ I believe in wrestling. And she’s by far one of my favorite wrestlers so it’s been amazing to train with her and go against her for my debut. Even though I debuted not too long ago, I’ve traveled across FL.

Raegan Fire: My dream opponent would be anyone of a higher ranking than me so I could learn more from them and ultimately make me a better wrestler. 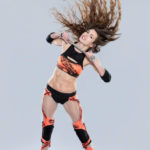