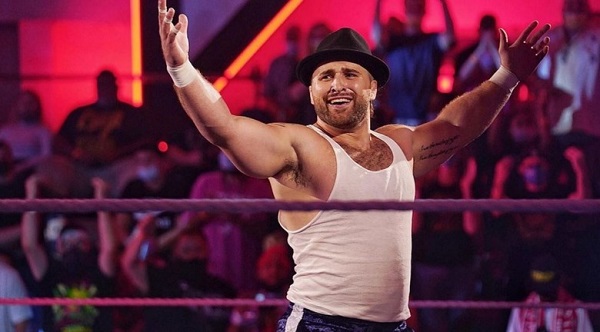 Tony D’Angelo is expected to be out of the ring for up to two months.

As noted, Tuesday’s WWE NXT show saw D’Angelo suffer an injury while facing Wes Lee in a qualifier for the NXT North American Title Ladder Match at Halloween Havoc. The match was taped back on September 14. After several minutes of back & forth action, D’Angelo charged at Lee but Lee side-stepped, then sent him face-first into the turnbuckles with a drop toe hold. D’Angelo was slow to recover and the referee quickly made his way over to check on him. Lee looked on and D’Angelo was unable to stand back up on his own two feet. The referee then called the match and named Lee the winner via referee stoppage. The replay indicated that D’Angelo suffered some sort of leg or knee injury. He was checked out by ringside doctors, and then helped to the back by two people. It was reported earlier this week that the injury was not believed to be that bad, and that D’Angelo would likely be back in the ring “sooner than you would think.”

In an update, a new report from the Wrestling Observer Newsletter notes that D’Angelo is expected to be out of action for 6-8 weeks, but that timeline is more than one week old at this point.

It was noted that D’Angelo did not need surgery.

D’Angelo still has not publicly commented on the injury, and WWE has not issued an official update as of this writing.