This Day in Wrestling History – July 30 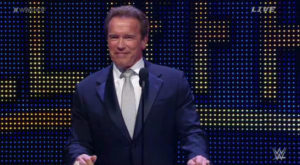 1960 – Gory Guerrero defeats Rey Mendoza to win the NWA World Light Heavyweight Championship.  Guerrero would hold the title all the way to August 6, 1963 – a span of 1,102 consecutive days.

1999 – A benefit card, Curtis Comes Home, is held in Rostraver, PA.  The event was to raise money for Brian Hildebrand (referee ‘Mark Curtis’ of SMW & WCW fame), who was battling stomach cancer.  The card saw the participation of WCW, WWF, & ECW wrestlers, and raised $30,000 for Hildebrand, who continued to fight the disease until passing away on September 8, 1999.

2005 – In the finals of CZW’s Tournament of Death IV, Necro Butcher defeats Zandig and Nick Gage in a Ultraviolent Boxes, Barbed Wire Canvas, Light Tubes, Squared Circle of Fear, & Whatever Is Left, Elimination Death Match.  As a result of the win, Butcher was awarded the CZW Ultraviolent Underground Championship (previously held by Zandig).

2012 – On Monday Night RAW, Abraham Washington makes a crass joke, referencing NBA player Kobe Bryant’s sexual assault case from 2003.  As his ‘client’ Titus O’Neil tangled with Kofi Kingston in a singles match, A.W. yelled from ringside, “Titus O’Neil is like Kobe Bryant at a hotel in Colorado.  He’s unstoppable!!”  When RAW returned from commercial break following the O’Neil vs. Kingston match, WWE apologized on-air via announcer Michael Cole, and A.W. subsequently issued an apology via Twitter, noting that “there was no malicious intent behind the joke.”  After RAW went off the air, WWE issued an official apology via TMZ.com, stating that they had “taken appropriate action in the matter.”

This would eventually lead to Abraham Washington being released by WWE on August 10, 2012.

About two hours before RAW was set to air live from Cincinnati, the stage area caught fire due to a pyrotechnics malfunction.  Everyone inside U.S. Bank Arena at the time were evacuated, and the fire was quickly put out.  There were no injuries, and RAW went on-air at its scheduled 8pm ET.

Today would’ve been the 61st birthday for AAA Hall of Famer El Brazo.