This Day In Wrestling History – October 31 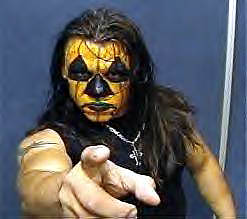 2008 – On a Halloween edition of SmackDown, The Undertaker defeats Chavo Guerrero in a Casket Match.

2011 – On a Halloween edition of Monday Night RAW, Eve Torres wins an 11-Diva Halloween Costume Battle Royal, to become the #1 contender for the WWE Divas Championship.

2013 – Impact Wrestling begins a tournament to crown a new TNA World Heavyweight Champion.  AJ Styles had been stripped of the title by President Dixie Carter, following a contract dispute.  Magnus wins a 7-man Battle Royal, to advance in the tournament.

2016 – On a Halloween edition of Monday Night RAW, Enzo Amore defeats Luke Gallows, in a Trick or Street Fight.

2019 – WWE Crown Jewel is held in Riyadh, Saudi Arabia in front of 70,000 fans. Drama ensued after the event as WWE’s chartered plane was reportedly prevented from leaving Saudi Arabia for the United States, leaving 175 wrestlers and other talent stranded for nearly a whole day after Crown Jewel. The original reason given was mechanical issues. However it was later reported that the WWE talent were prevented from leaving the country by the order of  Saudi Crown Prince, after Vince McMahon cut the TV feed of the Crown Jewel event from being broadcast into Saudi Arabia. The country reportedly still owed WWE millions of dollars for previous shows.

While several individuals were able to leave on private jets (Vince McMahon, Paul Heyman, and Brock Lesnar among others), those stranded were unable to make it to Friday Night SmackDown in Buffalo the next night.

Pre-Show Match:
– Humberto Carrillo wins a 20-man Battle Royal, for the right to face AJ Styles for the United States Championship. During the match, R-Truth and Sunil Singh were eliminated. Truth took advantage and pinned Singh with a roll up on the entrance ramp, to win the 24/7 Championship.

2020 – Jonathan Gresham defeats Tracy Williams, to win the revived ROH Pure Championship. The title had been unified with the ROH World Championship by Bryan Danielson in 2006.