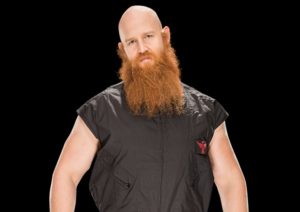 Erick Rowan appeared and attacked Wardlow who tried to interfere during a match.