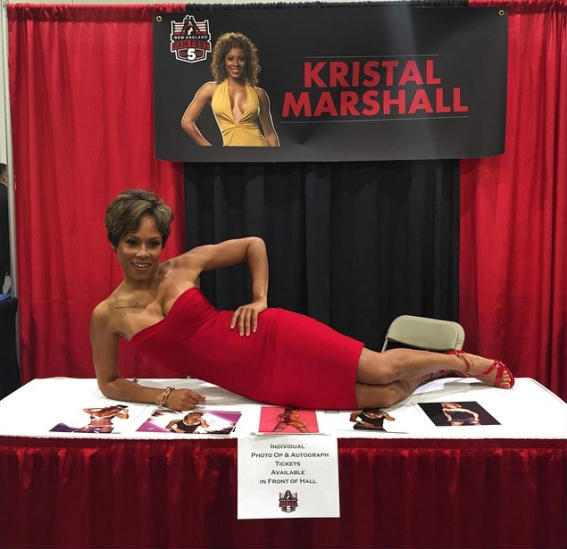 Speaking with Ring the Belle, WWE alumna Kristal Marshall discussed her time in the company and how she felt she could have done more in the ring. Marshall was with WWE from 2005 to 2007 during the “Divas Era” of the women’s division and was started to work as a backstage interviewer before getting in feuds that led to matches, largely with Jillian Hall and Layla. Marshall discussed the frustration in the locker room from the women over not being able to show more in the ring and the possibility of a return to the ring; you can check out some highlights below.

On being the women being frustrated during the Divas Era: “From my perspective, the woman in the locker room, myself included, we felt very stifled. We felt very stifled because for the women that were true legit wrestlers, they had to dumb themselves down to fill the role at the time. Now I say that to say this. Everybody has to bring an ingredient to the potluck to make the meal work. And at that time, we’re in a different era, and we were serving a different menu than what’s being served now. So, when you have a group of people that want to showcase their talent in a different arena and they can’t, a lot of times it can be — their frustration can be misconstrued as not being appreciative, or being defiant, or being that nasty f-word: feminist. But that wasn’t necessarily the case. What the women wanted at that time was the ability to be their very best version of themselves, and I think that that fire that was lit by those women before is completely burning hard and bright right now.”

On feeling like she had more to show in the ring: “Absolutely. Especially now, especially after I stopped wrestling and really got into fitness. My full athleticism was never even remotely touched on. I know for a fact if I had the opportunity to train more, and to have bigger matches, and to have what the women in NXT have — which is a forum to grow and develop as a character and an athlete, the sky was absolutely the limit for me. You know, if the opportunity ever comes again that I’m given those same opportunities to do that.”