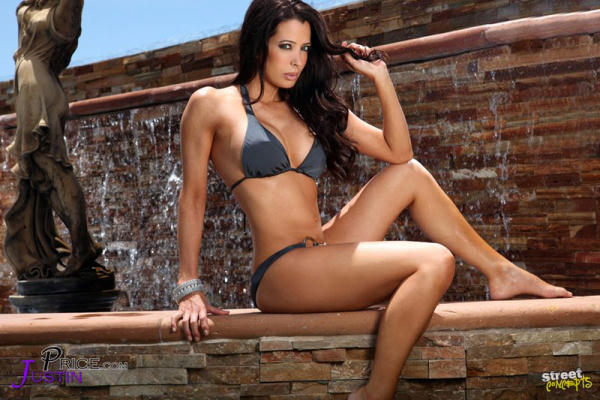 On the latest edition of Something to Wrestle, Bruce Prichard discussed a report from Wade Keller of PW Torch about how Amy Weber quit WWE in early 2005 after being ribbed by wrestlers on the road in Japan over a flyer that was being circulated on the streets of Japan for a strip club that had Weber’s photo on it. Weber claims the photo was taken from her past modeling work and used without permission on the flyer. Wrestlers claimed that they asked the doorman of the strip club that was being advertised on the flyer what the woman on the flyer (Weber) did, and he told them that she’d do anything they wanted for a price, but Weber claims she never had anything to do with the club. She ended up quitting the company and paying for her own flight to leave the trip a day early. Prichard also claimed that she gave her resignation from WWE to JBL, her on-screen boss, not realizing that JBL was not actually in a position of power within WWE. Highlights are below.

On wrestlers ribbing Weber over the strip club flyer: “To be clear, I adored Amy Weber, I thought she was great, she was easy to work with, and she was a lot of fun, and I thought she was a good talent. With all that being said, everything that you said happened, that all happened. It was a rib, it was busting chops, which in this business if you don’t bust chops, you’re going to go crazy, and if you can’t handle getting your chops busted, you’re going to go crazy. And it was innocent, and it was fun, and it was ribbing. I don’t think that anybody in their right mind believed that Amy actually ever worked for this club or had done anything, because you look at the picture, I saw it, it was a business card, it had the picture on one side and the club address and everything on the back side. I heard first hand from the people that got it. I was there, I witnessed the entire thing, and it was, ‘Hey, this is where I’m going tonight, anybody ever see this?’ And when they were holding the card, they were looking at the business side of the card with the information on it so that Amy could see her picture on the other side, and Amy took it and she goes, ‘Hey, wait a minute, that’s my picture,’ and they’re like, ‘Oh my God, you work there?!’ That’s how it went. And I think the continued, ‘Oh my God, you worked at this place,’ it just probably overwhelmed her, not probably, I know it overwhelmed her, and she took it to heart, and took it very seriously, and it was one of those situations with a rib going too far.”

On if he thought the rib went too far: “No, I don’t. Because I was there for the whole thing and it was just, that’s what happened, what I just explained to you.”

“I think everybody in their own walk of life has fun with their friends and their coworkers, and that’s all it was, that was ribbing, and nobody believed for a second that this was actually her but wanted to have a good time with her, at her expense.”

On how Weber tried to quit to JBL: “From there, I talked to her that day, I talked to her that evening, I think she went in and tried to quit to John Layfield, who was her fictional boss, but again, that comes from Amy was not part of our business, she didn’t understand. She was new in the business and some people just don’t understand how things work and she was still finding her way, and the classic line from Layfield was, ‘Amy, quitting to me is like quitting to Tony Garea, it doesn’t mean anything, you can’t give me your notice.’ She was a very nice young lady and I think that the business was not her cup of tea.”

On how Weber should have gone along with the joke: “I think if she had gone along with it, that everyone would have embraced her. Frankly, I think if she had stuck around, everyone would have embraced her. But I just think that it was too much, too soon, too heavy, I think she thought, ‘Oh my God, everyone believes this, they think it.’ No, they’re working, they’re working, they’re having fun with this. Go with it. Give them a rate card. I don’t know, anything. It was an unfortunate outcome.”