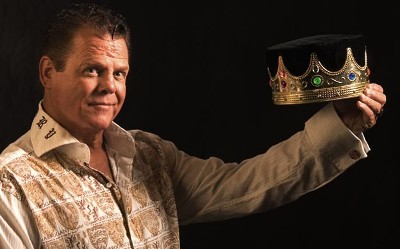 In his latest episode of his podcast The Jerry Lawler Show, WWE Hall of Famer and Raw commentator Jerry “The King” Lawler talked about the talent meeting that took place this past Monday prior to Raw.

Following the major issues resulting from the Saudi Arabia trip that saw over 150 WWE Superstars, crew, and employees getting stuck in Saudi Arabia for an extra day, Vince McMahon called a meeting with all the talent that were present for Raw on Monday to explain what happened.

Lawler said that many on the roster were frustrated because while they were in Saudi, the information was not getting through to them as no one bothered to explain to them what was going on, resulting in mass confusion. He noted that talent become “their own worst enemy” when they start believing all the rumors, which didn’t help the situation while on the ground in Saudi.

The King said that during the meeting, United States champion AJ Styles and fellow O.C. member Karl Anderson spoke up on behalf of everyone, saying how the lack of info relied to them was frustrating to everyone. Vince McMahon explained to everyone the timeline of events and what happened and also went over the “expanded” deal with the Kingdom of Saudi Arabia which will see them going to Saudi twice a year for the next eight years.

Lotta rumors & talk about "conspiracy theories" concerning the Crown Jewel show…I got the straight scoop on my new podcast!
https://t.co/Ta8NSKZvnQ