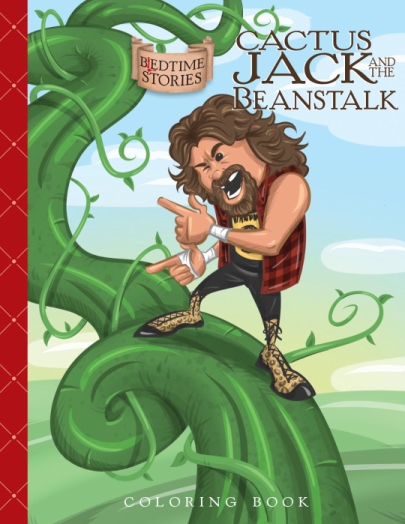 BLEDTIME STORIES: This fun project is a new “collectible coloring book series for grown-ups” (but also great for kids) that pits professional wrestlers against their toughest opponents ever… the classic fairy tales! And yes, these tales are all co-written by the headline wrestlers, themselves!

ISSUE #1, CACTUS JACK AND THE BEANSTALK: We are kicking this series all off with the re-telling of the classic legend at hand co-written by “The Hardcore Legend” himself, Mick Foley! To reboot this story with a boot to the head, Mick Foley teamed with Kenny Casanova who is the ghostwriter of many wrestler autobiographies including Kamala, Brutus Beefcake, Sabu, Vader, & the upcoming Tito Santana.

The first chapter is entitled “Cactus Jack and the Beanstalk” spoofing the original story. In our universe’s version of the timeless tale, it is Cactus Jack who trades a cow for some magic beans, climbs a giant beanstalk, and has to battle a giant. The difference is the characters are all parodied by cameos of people from Mick’s past! With Mick Foley lending his pen to twist this famous fairy tale, there really is no telling what will happen on the pages, that is, unless you order now!

ARTWORK: The artwork is incredible. Pete Bregman is no stranger to art in the wrestling world as his designs are being used for Steve Austin shirts, Chavo Guerrero’s beer labels, and the Wrestlemojis app. He is also the man behind Cartoon Network’s LEGO animation feature Star Wars: Revenge of the Brick! and the LEGO Batman’s animated debut. He has also created content for Hasbro brands such as Marvel Entertainment, Star Wars, Nerf, Transformers, and Pay-Doh, as well as pop culture icons like Bazooka and Topps.

MORE CHAPTERS TO COME! Future Bledtime Stories editions include professional wrestlers like Sabu vs The Three Pigs, Brutus Beefcake as Goldilocks, Kamala in Oz, Justin Credible, Tito Santana and more just to name a few! (We also have our fingers crossed for Paul White & The Seven Dwarves!)

All of the chapters in the Bledtime Universe, of course, will always provide the reader with an entertaining story, a collectible keepsake, and also the ability to “get some color” with the legends for every scene according to the wrestlers’ wildest imaginations.