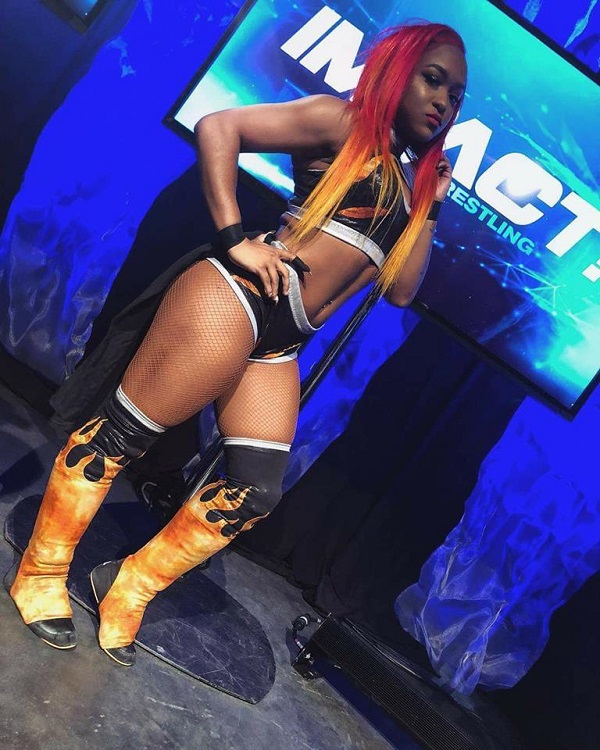 Kiera Hogan Scheduled to Participate in Chicago Wolves’ Inaugural Pride Night, Speak at the Center on Halsted in Chicago & Much More

Kiera Hogan is having her coming-out celebration this October in Chicago in conjunction with IMPACT Wrestling’s Bound For Glory extravaganza, which is Oct. 20 at The Odeum Expo Center in the Chicago area – with multiple high-profile events scheduled, IMPACT Wrestling announced today.

In late-July, Kiera shared on social media that she is dating fellow wrestler Diamante, and her coming-out story was featured on OutSports.com, which is run by SB Nation. (See link below for Kiera’s OutSports.com story.)

Here is the schedule for Kiera’s event in Chicago:

Details: This Pizza Party is geared for area youth, hosted by The Pinta Pride Project, which runs Buffalo Grove Pride in suburban Chicago. Molly Pinta, age 13, spearheaded the first-ever Buffalo Grove Pride Parade this past June and has garnered widespread local and national press, including The Today Show. Kiera will speak to the attendees, sign autographs, pose for photos, and more.

Details: Kiera will talk with players before the games start, then perform the ceremonial coin-flip duties for CMSA flag football games. The Chicago Metropolitan Sports Association (CMSA) is the largest non-profit gay and lesbian sports organization in the Midwest, with about 3,200 members. CMSA has recreational and competitive levels play in a variety of athletic leagues throughout the year. CMSA is open to all, regardless of sexual orientation, gender, or gender identity.

Details: The successful minor league hockey team is holding its inaugural Pride Night, with a portion of select tickets sold to the game to benefit the Center of Halsted, which is Chicago’s LGBT community center. Kiera will do the Ceremonial Puck-Drop, then participate in various Pride Night festivities.

Bi-Ceps Before Brunch: A Speech and Q&A with Kiera Hogan

Details: Kiera will speak at the Center on Halsted, which is Chicago’s LGBT community center. Her 45-minute talk will include a Q& A session, plus autographs and photo opportunities.

IN THE RING WITH … KIERA HOGAN

Kiera Hogan has been wrestling professionally since 2015 and an IMPACT Wrestling Knockouts Division member since 2017. She is an Atlanta area resident who lives with her three dogs. Kiera played varsity soccer for three years in high school, then went to college for one year.

“My parents wanted me to go to college; I wanted to pursue my dream – being a professional wrestler. So yes, I had to go through a lot to get to where I am now in wrestling, and thankfully, my parents now are head over heels with my wrestling career and super supportive,” she said.

Kiera has the tattoo “Aspire To Inspire” on her left forearm, which truly is her motivation. “Live your life the way you want to. Whatever dream you have, follow it … I’m able to follow my dream every day,” she said.

Kiera Hogan will participate in Bound For Glory on Sunday night, October 20, at the Odeum Expo Center in Villa Park. Bound For Glory is the premier event of the year for IMPACT Wrestling, and it will air live exclusively on pay-per-view. For tickets to Bound For Glory, go to: www.impactwrestling.com.

IMPACT Wrestling is donating a limited number of complimentary tickets to Bound For Glory to attendees at all of her various Chicago-area events.