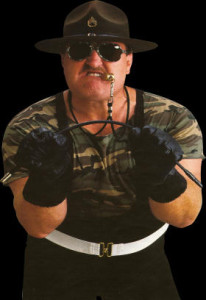 1990 – The Snowman is stripped of the USWA Unified World Heavyweight Championship, after no-showing for a title defense.

– Right To Censor (Bull Buchanan, Steven Richards, & The Goodfather) defeat Too Cool (Rikishi, Scotty 2 Hotty, & Grand Master Sexay).
– X-Pac defeats Road Dogg.
– In a Mixed Tag Team Match with the Intercontinental Championship on the line, Chyna & Eddie Guerrero defeat titleholder Val Venis & Trish Stratus.  Chyna got the pinfall over Stratus, making her the new Intercontinental Champion.
– Jerry ‘The King’ Lawler defeats Tazz; Jim Ross had assisted by breaking a glass jar over Tazz’s head.
– ‘The Lethal Weapon’ Steve Blackman defeats Shane McMahon, to win the WWE Hardcore Championship.
– Chris Benoit defeats Chris Jericho 2-1, to win a Two out of Three Falls Match.
– In the first Tables, Ladders, and Chairs Match, Edge & Christian defeat The Hardy Boyz (Matt & Jeff) and The Dudley Boyz (Bubba Ray & D-Von), to retain the WWF Tag Team Championship.
– The Kat defeats Terri in a Stinkface Match. The first one to deliver a Stinkface to her opponent won the match.
– Kane vs. The Undertaker ended in a no contest. The match never started as both men began brawling outside the ring.  After Kane hit Undertaker with a low blow, Undertaker hit Kane with a spear and ripped his mask off; sending Kane running to the backstage area.
– In a Triple Threat Match, The Rock defeats Triple H and Kurt Angle, to retain the WWF Championship.

2001 – On RAW, The Hurricane defeats Matt Hardy, to win the WWF European Championship.

2009 – Dixie Carter makes her television debut on TNA Impact!   Carter announces a new TV contract with Spike TV that will extend through 2012.  On the same night, Mick Foley decides to make the TNA Knockouts Championship vacant; Cody Deaner felt he should have been awarded the title at Hardcore Justice since he scored the pinfall.  Instead, his partner, ODB, was awarded the title that night.

2010 – Luna Vachon is found dead in her home.  She  had died from a drug overdose at age 48.  Vachon was a former USWA Women’s Champion, and challenged for the WWF Women’s Championship in late 1998 and early 1999.

2011 – NJPW / AJPW / Pro Wrestling NOAH hold a joint event titled, All Together, held in Tokyo. This was a benefit show for victims of the Tohuku earthquake and tsunami that occurred five months earlier.  All proceeds were donated to the Japanese Red Cross.

And finally, happy birthday to the man that owns and runs this very website, Steve Gerweck!!