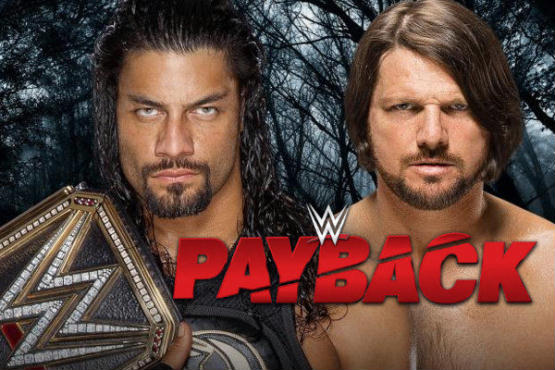 It’s time to step into WWE territory once again as we take a look at their latest pay-per-view offering, Payback, shown live in the early hours of this past Monday morning on Sky Box Office here in Britain.

The show kicked off with tag team action, sponsored by Booty-O’s, and the final of the tournament to determine the number one contenders to the New Day’s Tag Team titles between Enzo Amore and Colin Cassady and the Vaudevillains, Aiden English and Simon Gotch.

Sadly this match will be remembered for the unfortunate injury to Amore. It looked as if we were going to get a great match, judging by the opening exchanges, but when Gotch through Amore into the ropes he hit them face first before crashing out of the ring unconscious. The match was quickly waved off, with Amore taken from the arena on a stretcher.

After that unfortunate incident it was on to grudge match action between old rivals Kevin Owens and Sami Zayn.

If you know about the history between Kevin Steen and El Generico in Ring of Honor then you know what these guys are capable off. They were a tremendous tag team but were even better rivals.

For me this match was the perfect extension of everything they’d done before, the proverbial knock down, drag out affair which had the fans eating out of the palms of their hands. Both guys put in tremendous performances throughout as the showed the world what those of us who saw them in ROH all those years ago already knew.

I really can’t praise this match too highly, it was that good. It was like the perfect jigsaw puzzle, but sadly there could be only one winner, and after a ton of great moves Owens countered Zayn’s helluva kick attempt with a super kick before taking his man down with the pop-up power bomb for the winning pin.

Owen’s work wasn’t done though. After attacking Zayn and throwing him over the top rope he called Byron Saxton into the ring for a post-match interview, and with his rivalry with Zayn apparently over Owens stated his intent to regain the Intercontinental title before deciding to take a chair at the commentary table.

Which took us nicely to the first title match of the evening with Cesaro challenging the Miz, accompanied by his missus Maryse, for the Intercontinental title.

Following Owens and Zayn could have been a difficult task, but these guys just about pulled it off. It was great seeing Cesaro back in the ring again looking like he hadn’t missed a beat, while the Miz put in his usual solid performance, although I’m left to wonder exactly why Mrs. Miz was brought back. Apart from one moment of interference she didn’t really do or add much to the occasion.

But as good as this action was it was the combatants of the previous match who had a pivotal role in the outcome, because as Cesaro took the upper hand Zayn came rushing out to ringside and attacked Owens at the commentary table. Their brawl almost took them into the ring, and while the referee tried to stop them Miz tapped out to Cesaro’s crossface.

The only problem was that the referee was too busy dealing with the interlopers to see the tap out, so when Cesaro knocked Zayn and Owens off the ring apron Miz came up from behind and rolled him up, taking the three count with a handful of tights.

That wasn’t the end of things though. Unhappy with the manner of his defeat Cesaro attacked Miz at ringside before throwing him back into the ring and taking him down with the neutralizer. This left him open to a super kick from Owens, who then took Zayn down with a pop-up power bomb. But when he tried to do the same to Miz Maryse pulled him out of the ring, showing that she did have a use after all, and as the champion and his bride looked on Owens stood in the middle of the ring holding the title belt aloft.

So what do you get when two talk show hosts go at it? Sadly we never got to see Letterman and Leno in the ring against each other, which means we got these two instead.

It wasn’t too bad I suppose. It took a little while to get going, and things only really got interesting for me after Jericho catapulted Ambrose from the German announcer table into the somewhat vacant timekeeper’s area. It certainly took the tension levels up a notch of three after Ambrose barely beat the referee’s ten count to make it back into the ring.

From there these two gave us some nice exchanges, with Jericho’s frustration apparent for all to see when he couldn’t put his man away. His mood certainly wasn’t helped when Ambrose raised his knees to counter Jericho’s lionsault, and although he tried to fight it off Jericho eventually fell to Ambrose’s dirty deeds DDT to give the lunatic fringe the pin.

This was another fine outing for the women’s division. After the show-stealing efforts last month at Wrestlemania this division gave us another great example of what women’s wrestling is all about.

But despite all of the great moves and counter-moves on display here this match will probably be remembered because of it’s ending. With everything else having failed, Charlotte decided to dip into her opponent’s bag of tricks when she put Nattie in the sharpshooter, and with Earl Hebner employed elsewhere these days it fell to Ric Flair’s former mini-me Charles Robinson to call for the bell before Nattie had submitted, giving Charlotte the title-retaining win.

But unlike Montreal there was no ushering of the champion away by the chairman. The Hitman got into the ring, and after exchanging a few choice words with the Nature Boy decked him with a right hand. Nattie then avoided Charlotte’s belt shot before the Harts put the Flairs in a pair of sharpshooters.

After the announcement that both Shane and Stephanie McMahon would be running Monday Night Raw it was on to the main event as A.J. Styles challenged Roman Reigns for the World title.

Well, there certainly was a lot going on in this one, and once again it was one of those matches that got better as it went on. The action between these two was okay to begin with, but things only really got going with the first of the false finishes when Styles put Reigns through the announcer’s table with a flying forearm. But when he couldn’t get the champion back into the ring Styles opted for the count out win, even though it didn’t give him the title.

It was then that Shane McMahon appeared on the scene, using his new power to order a re-start, making this a no count out match. The heat certainly went up a few degrees, but when Reigns caught Styles with a low blow as he came off the top rope the referee had no choice but to disqualify the champion, giving Styles the win.

It was then that Stephanie McMahon appeared on the scene, using her new power to order a re-start, making this a no disqualification match. Things then got a little hotter, particularly when Reigns took Styles down with a Superman punch as the challenger came off the top rope.

The new stipulation also meant that we were guaranteed a few cameo appearances. First came Luke Gallows and Karl Anderson, before the Usos came out to even the sides a little, and after the obligatory over the top rope segment and a fast exchange of moves Reigns connected with a spear to finally take the title retaining three count.

In conclusion – the first pay per view after Wrestlemania can sometimes be a little tricky, especially when you tout the company entering a “new era” in the way that WWE has lately.

Payback ultimately achieved what it set out to do. The majority of the matches delivered, and the main event played out quite well, although it’s more than obvious to those with a pair of ears that Roman Reigns is probably the biggest heel in the company at the moment, so maybe it’s time that the creatives went with the flow. Mind you, they could also go out with A.J. Styles, although I can’t see them putting the title on him…..yet.

As for my match of the night no-prize there was only ever one real contender this time around, and that was the remarkable Owens/Zayn encounter. I never tire of seeing these two against each other, so let’s hope that the plug isn’t pulled on this rivalry just yet.

So with all of that being said there’s just one more thing to do, and that’s to give Payback the thumbs up.