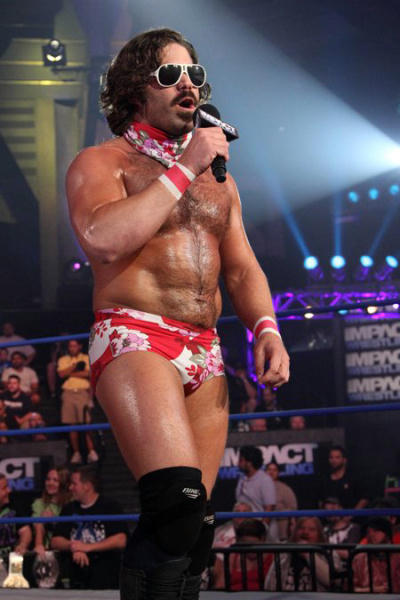 Ring Rust Radio: As one of the newest members of the Lucha Underground roster, what was your perception of the brand before joining and how has it changed since you joined the company?

Joey Ryan: To be honest, my perception changed in between Season 1 and Season 2. They had approached me about joining Season 1, but I had some reservations given the fact that the product was unknown. I have seen companies with similar model plans come before like Wrestling Society X. So a lot of things did look similar at the time and the contract terms I was a little unsure about. I passed on the first season, but the second season they approached me with another idea. This was after I talked to some of my friends like Brian Cage, Jack Evans and Ricochet. They told me my reservations were unfounded, and it’s not the same thing I would have dealt with before. They are a straight up company and not trying to restrict you or hold anyone back. They are trying to put out a great product and the product itself is really great. They really connected with the wrestling audience, so I was all gung ho about them wanting me for Season 2.

Ring Rust Radio: While Lucha Underground is extremely unique and really unlike anything wrestling fans have ever seen before, one promotion that it does get compared to be some due to the overall grittiness is Wrestling Society X. As someone who has worked for both companies, what do you believe are the biggest similarities and differences?

Joey Ryan: The similarities are they both want something different and new and they are striving for that. They didn’t want to rehash WWE or whatever the mainstream idea of wrestling is. That is what I fell in love with when they signed me to Wrestling Society X way back in 2006. The execution is a big difference. Not that we didn’t have great agents or match makers or great production team in Wrestling Society X, because we did. It was the fact that we didn’t have MTV 100 percent behind the product. Obviously, they are a huge network and El Rey is an up and comer and building its base. El Rey is a lot more invested in the product and wants to see it succeed. That’s where MTV could afford to give a million dollar budget to Season 1 of Wrestling Society X and didn’t need to worry about building the product because they could afford to just throw that kind of money away because they were MTV. With El Rey, more than any other place I have wrestled in, they make it feel like a family. You know that not only the network and owners and production team are all invested in it, but they really do want to see it succeed. Not just for the wrestlers to be successful, not just for the show, but for the network. It feels like we are all in for one big goal and we are team going for that one goal. I think El Rey’s investment in the product as well as the talent and wrestlers and all of us pushing forward.

Ring Rust Radio: We became big fans of yours during your run with TNA and it seemed a lot of fans were starting to support you as well. We hoped that you would receive a bigger push than you did before you eventually left, so why do you think TNA didn’t try to feature you more prominently?

Joey Ryan: I think they had an idea. When I came in, they obviously felt my fan support and put me in with Matt Morgan who they were really high on and had big plans for. I think that they just didn’t have much direction for us. That’s fine and you can flounder around for a little bit, but then when you go aimless for a while, it feels dead and runs its course. We just kind of start to do the same thing all the time and we lost interest with the management. Hindsight is always 20/20, and I came in with the fans supporting me. My whole shtick there was 87 percent of their audience wanted me on the show and then management would say no. They thought I should have come in like a rebel and babyface-ish because I was representing the people. Their idea was I was being a trouble maker, so I had to be a heel. Which is fine by me, I am a team player and that what the writers wanted at the time. I feel like I would have had more length and story if I would have come in representing the people. Almost like a Steve Austin or a Diamond Dallas Page in WCW feel to it, but that’s not the direction they wanted to go. I didn’t leave on bad terms with them at least. When they started taking the show out of Orlando and started touring different arenas, I think the expenses got high and they weren’t drawing the way they thought they would. So they started losing a lot of money and cut me with about 10 or 12 of us. They cut RVD’s contract and didn’t renew Matt Morgan contract in an attempt to save money. It wasn’t like I did anything wrong or they didn’t like my work or that we were angry with one another, it was just budget cuts plan and simple, it’s just business.

Joey Ryan: It’s kind of strange. There is no manual you read on what to do if your video goes viral. It was on The Soup, it was on ESPN, Maxim magazine, GQ magazine, New York Daily News and it made the rounds. Then Rolling Stone and Sports Illustrated did an article on me. Then YouPorn wanted to sponsor me because they are trying to crossover. They did some stuff with video games last year and now they want to do some stuff with sports to help that crossover marketing. It’s kind of like these things where all this attention is coming my way, and it’s awesome because as an entertainer the more attention you get the better. As far as my in ring stuff it’s kind of weird. I don’t need to do the move, but all the promoters I work for need it on their show because of the attention it gets. Even wrestlers I wrestle come up with a great idea to work with it. So I don’t even have to come up with an idea with their creative juices to help them stand out in the way they take it. It’s cool how accepted it has become inside wrestling and our community. My peers and everyone want to be a part of it and want to do it. Most of the attention I have gotten is from outside the wrestlers is either the main stream or the casual friends. I hear all the time that someone’s friend knows they are into wrestling and sent them the link or my friend knows I wrestle so they sent me this video. It is a lot of attention from that main stream which is really cool. It’s something I can get recognized for outside of the stuff I do in the ring. It’s something that people who aren’t familiar with my work can recognize me for.

Joey Ryan: It’s kind of crazy. In my mind there is no separation to me, it’s just wrestling. Obviously, there is that label of inter-gender wrestling as far as the wrestling community goes. I knew Lucha Underground blurs the line of it, and they are the first major company to do that. Candice and I, when we started teaming, we didn’t have this idea of we are going to do this thing that is so different and unique. She is the only girl that is active in PWG and then we just thought of joining as a tag team. We didn’t put an emphasize in our heads that we were a guy and a girl, but it was really well received and now you see it more in other places. The way I look at it is what we are doing in the ring is making a live action movie. If you have that attitude of guys shouldn’t fight girls or I don’t enjoy that. In my head, I don’t see the difference between that or the inter-gender fighting in Star Wars: The Force Awakens or Avengers when Scarlett Johansson is fighting dudes. I don’t see the difference because what we are doing is a live action version of that. In my head, we are an entertainment industry and that’s the same. You can’t differentiate different fight scenes from one to the other medium. You could say well that’s a sci-fi fantasy and what we do is reality fantasy, but still if you are willing to believe an Irish-whip will work and someone will bounce off the ropes and come back to you, then you can believe that a girl can do a pro wrestling move to a guy. It’s all your suspension of disbelief. I love the fact that’s its becoming a trend and gaining momentum. Now that’s there is support from Lucha Underground to do it more at a main-stream level, I think that it’s the future. People want heroes and they don’t want the same old male heroes fighting male villains or female heroes fighting female villains. They want to see it mixed up or something new. You have to be on the cutting edge of this stuff if you want to stay relevant.