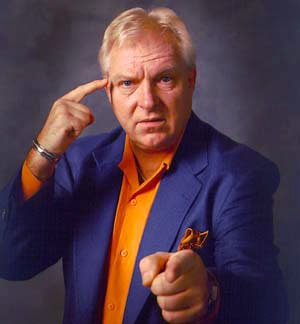 – In 1965, Heenan made his ring debut against Calvin “Prince” Pullins.
– Heenan found his knack, not as a wrestler, but as a manager.
– In the early 70’s, Heenan became the mastermind behind the triumphant tag team of Nick Bockwinkel and Ray “The Crippler” Stevens.
– Heenan adopted “The Brain” moniker, dropping the “Pretty Boy” gimmick.
– On September 7, 1974, Heenan and The Sheik beat Dick the Bruiser and Bobo Brazil in Chicago, IL.
– On November 8, 1975, Heenan was in Bockwinkel’s corner as he captured his first AWA World title. Heenan led Bockwinkel to three AWA title reigns.
– Heenan managed Blackjack Lanza and Bobby Duncum to the AWA World Tag Team title. Lanza and Duncum defeated Dick the Bruiser and The Crusher on July 23, 1976 in Chicago, IL for the tag team title.
– In January 1979, Heenan left the AWA in favor of the NWA’s Georgia Championship Wrestling group. To explain his time away from Verne Gagne’s group, Heenan was “suspended for one year.”
– In Georgia, the Heenan family included Blackjack Lanza (who followed Heenan from the AWA), The Masked Superstar (Bill Eadie, better known as “Demolition Ax”) and “Killer” Karl Kox.
– By the end of 1979, Heenan returned to the AWA and resumed managing Bockwinkel.
– In 1983, Heenan broke his neck in a match in Japan. He opted to hold off having surgery until 1995 when Heenan had two discs removed from his neck.
– In September 1984, Vince McMahon Jr. hired Heenan to manage Jesse “The Body” Ventura. However, due to an injury suffered by Ventura, the WWF decided to have Heenan manage Big John Studd.
– Heenan also became a member of the WWF announcing team. Heenan was partnered with Gorilla Monsoon. The duo commented each week on the USA Network’s “Prime Time Wrestling,” and on the syndicated “Wrestling Challenge” shows. Heenan was dubbed as a “broadcast journalist.”
– In August 1986, Heenan guided Harley Race to winning the King of the Ring tournament.
– At Wrestlemania III in Pontiac, MI, Heenan managed Andre the Giant against Hulk Hogan before the largest crowd assembled for a wrestling event in North America.
– Heenan teamed with his Islanders at Wrestlemania IV in a six-man tag match against the British Bulldogs and Koko B. Ware. The match ended when Heenan pinned Ware.
– “The Million Dollar Man” Ted DiBiase tried to buy the WWF title from Hulk Hogan. When Hogan refused, DiBiase struck a deal with Heenan to purchase the contract of Andre the Giant, who ended Hogan’s four year WWF title reign in February 1988.
– Heenan arranged for a special coronation ceremony in the summer of 1988 to crown Haku as the new king of the WWF.
– Under Heenan’s tutelage, “Ravishing” Rick Rude captured the Intercontinental title from The Ultimate Warrior at Wrestlemania V in Atlantic City, NJ.
– With Heenan in their corners, Tully Blanchard and Arn Anderson (dubbed the Brain Busters) captured the WWF World Tag Team title from Demolition on July 18, 1989.
– After regaining the services of Andre the Giant, the Heenan family captured a second WWF World Tag Team title on December 13, 1989, when the Colossal Connection (Andre the Giant and Haku) defeated Demolition in Huntsville, AL.
– Heenan became the “perfect manager” with the arrival of Curt Hennig into the Heenan family. Hennig joined the WWF as Mr. Perfect.
– On April 23, 1990, Heenan guided Mr. Perfect to the Intercontinental title. Hennig won an eight-man tournament to capture the championship.
– In 1991, World Championship Wrestling fired Ric Flair. Upon his arrival in the WWF, Heenan became the “Nature Boy’s” manager.
– At the 1992 Royal Rumble, Flair won the battle royal to capture the vacant WWF title.
– Opting to cut down on travel, Heenan signed with WCW in 1994. Heenan decided to end his career as a manager, and focus on color commentary.
– Indianapolis Mayor Steve Goldberg presented Heenan with a plaque proclaiming April 3, 1997 as “Bobby Heenan Day.”
– On November 2, 2000, Heenan was informed that he had been released by WCW.
– Former WCW announcers Lee Marshall and Heenan provided commentary for WOW’s inaugural PPV “Unleashed” on February 4, 2001 in Los Angeles, CA.
– At Wrestlemania XVII in Houston, TX, Heenan provided commentary with “Mean” Gene Okerlund during the gimmick battle royal.
– In November 2001, Heenan returned to the ring for XWF, this time calling himself a sports agent, to once again manage Curt Hennig.
– Heenan was inducted into the WWE Hall of Fame on March 13, 2004.
– On April 17, 2004 in Las Vegas, NV, Heenan received the Iron Mike Mazurki award during the Cauliflower Alley awards banquet.
– On April 1, 2006 in Chicago, IL, Heenan inducted the Blackjacks into the WWE Hall of Fame.
– Heenan was inducted into the GERWECK.NET Hall of Fame on March 15, 2007.
– Heenan inducted Nick Bockwinkel into the WWE Hall of Fame on March 31, 2007 in Detroit, MI.