My wife, Stephanie, & I met at the hight of Eugene-mania while I was with WWE. I met her while in Sioux Falls, SD on a promotional tour with William Regal. She is a spokesmodel and TV personality. She is the 2016 Mrs. South Dakota. She competed in the 2016 Mrs. America where she won the fitness award. We currently own Midwest All Pro Wrestling in Sioux Falls, SD where she is our announcer/host of the show. Her twitter is @QueenMrsSD

We have been running Midwest All Pro to Wrestling a little over a year. We have run several successful events as well as have a training center. We have featured stars such as The Daivari brothers, Carlito, Kizarny, Damien Sandow, Bob Holly, Shelton Benjamin, and Tatanka. 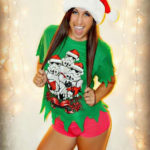