Laura and I met doing the second leg of the puscifer tour. We connected and realized we were really similar. So when we got back we decided to try and be a tag team. Our first tag match was against Joey Ryan and Douglas James at FCW in San Diego. We tagged together a little bit and then Yuma gave us the name the Killer Baes, Heather told us.

Official #KillerBaes pins available at @Heatherisme & @lauraclarejames live shows, and at https://t.co/21blUdMje6! This weekend you can get it (and all our other pins) for 40% off with the code GOBBLE, and get a free Gobbledy Gooker pin (w/ our first 50 orders)! #womenswrestling pic.twitter.com/J59w7wI10A

I was trained by Gangrel and Knokxpro. I wish I could remember my pro debut, I believe it was in the summer of 2013. I don’t particularly have one dream opponent but I have been wanting to wrestle team tremendous for a while now, there are so many talented people out there right now though that I could be here all day listing people. 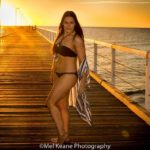