I was trained at Santino Bros Wrestling Academy in So Cal by Joey Kaos, Robby Phoenix and Los Luchas. I debuted in October of 2015 and I have traveled all around the United States, Europe and Australia with the band Puscifer as part of a lucha libre act called Luchafer. 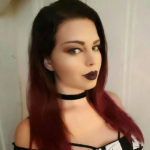