Q. What is your wrestling background and how did you get your start with Women of Wrestling (WOW)?

GL. Growing up my dad and brother got me into wrestling. My first show was with them at Nassau Coliseum in Long Island, NY back when the Rock was first asking, “Do you smell what the rock is cooking?” and when Hulk Hogan was on top of the world. Years went by and I wasn’t as tuned in, but then Total Divas began airing in 2013 on E! and I was really awestruck by these women and how talented they were. I come from an athletic/dance background and when I saw how hard working and fierce these ladies were I felt drawn to get back into watching wrestling more. Right around this time I started hosting AfterBuzz TV’s “Main Event” aftershow and soon after the “Total Divas” aftershow alongside current WWE announcer Christy St. Cloud. I took a small hiatus because AfterBuzz wasn’t hosting Main Event anymore, and then mid 2017 I began hosting Smackdown LIVE’s aftershow with AfterBuzz TV again (in lieu of Christy heading to WWE).

My start with WOW … well I first got in front of David McLane and some of the wrestlers at an audition. I was there because they were searching for wrestlers, but I was searching for a backstage reporting job! Although they didn’t officially need reporters at the audition, I came prepared and delivered a good audition. In the months to come I continued to pursue a working relationship by simply reaching out to Women of Wrestling founder, David McLane. It was hard to get through to him, but I stayed on it. My persistence paid off, because when the time came that they were shooting season 5 and seeking backstage announcers, I got a call from David McLane. So persistence, and being ready for the opportunity when it presented itself is how I got the job with WOW.

Q. Can you give us a sneak peak into season five?

GL. Yes, it will debut in 2018. It’s production value has increased since season 4 and it literally will be full of surprises for the viewers. Santana Garrett is the champion at the beginning of the season and you’ll have to see if she remains the champ on the last episode. I can also tell you, that in women’s wrestling, for a while, only Chyna had made a truly lasting impression … now we have a “women’s revolution” not only in WWE but in WOW. Everything is going to change when fans see the introduction of WOW’s newest Superhero, The Beast. This wrestler The Beast, is going to leave a mark on wrestling fans that will never be forgotten. If you missed it, she even challenged “The Rock” at Comic Con LA. I wouldn’t want to get in the ring with her! She is one exciting element of season 5, but there is so much more and I can’t wait for everyone to see it!

Q. Do you watch WWE on a regular basis?

GL. Yes. I watch Smackdown Live every Tuesday and when I have time I tune into parts of RAW or catch up on highlights.

Q. Where do you see yourself in 5 years?

GL. I LOVE live hosting so it would be a dream to either be on a network TV show where I am hosting in front of a LIVE studio audience like TRL in the 1990s/2000s, or LIVE in an arena again on a weekly basis like how I was with Monster Jam. I really enjoy backstage reporting for wrestling so if I could make it to Impact or WWE at some point that would be the opportunity of a lifetime. I don’t have an exact place I see myself in 5 years just goals that I hope to accomplish within those 5 years. 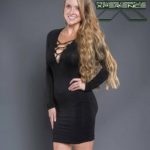