Dream opponent: It’s a hard choice. I want to face so many. To name a few: Charlotte, Asuka, Becky Lynch, Sasha Banks…

My parents are my number 1 fans. They barely miss a show and they are not shy to be even sometimes my hardest critic. They are the best, I couldn’t thank them enough for all the support they give me!

My goal is WWE. So hopefully, this is where I would be in five years! 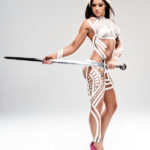