I just made my in ring debut as a wrestler this year but trained and worked shows as a manager since I started in the business.

Started training with Tugboat Taylor in 2011
Currently training at TASW

My all time favorite wrestler is Lita, and my dream opponent is Charlotte 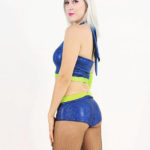