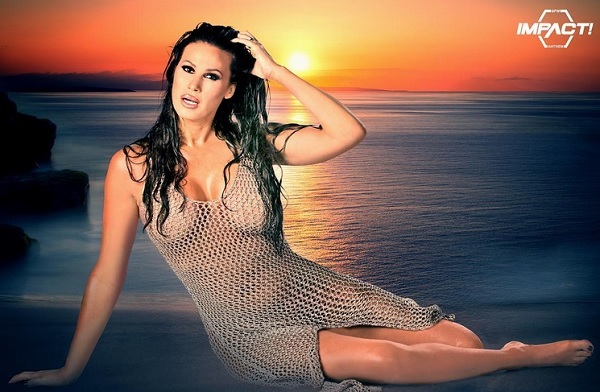 We noted earlier this month how Karen Jarrett made a series of tweets where she lashed out at her ex-husband, WWE Hall of Famer Kurt Angle, apparently for his deleted reaction to a line from a rap that AEW World Tag Team Champion Max Caster performed on AEW Dynamite. Karen ended up accusing Angle of being involved with Kelly Kelly while they were married, and this led to a response from Kelly. Caster also replied to Karen, and Karen’s husband, AEW star Jeff Jarrett, responded as well.

Jim Cornette discussed Karen and the recent tweets on a recent episode of his “Drive Thru” podcast. Cornette said:

“I like Karen. I’ve always enjoyed my conversations and interactions with Karen, I don’t have a bad thing to say about her otherwise and she almost broke my back the last time we actually did a spot in Illinois about seven years ago. I didn’t ask them (if they were divorced) when they showed up in TNA and Karen was on camera and doing stuff, I didn’t know they had been separated to that point because I don’t ask people about their personal business, but this is news to me. Well, it could’ve been a work if Karen was mad at Max Caster and came out and slapped him in the face, but now all these other people are getting involved and I’m wondering at this point, maybe they struck a nerve with Karen and Jeff wasn’t home yet, so she couldn’t say to him, hey, what the hell are they saying and who knows. She’s got a great personality; she was a natural for the f***ing wrestling business. Between the promos and the f***ing expressions and the f***ing whole nine yards. Do you think that Kurt had told Karen that he was messing around with Kelly Kelly to throw her off the scent of who he was really messing around with?

“You know, actually, there was a deal like that in OVW, one time. And I can’t remember the exact story that was being told and I know the people that were involved, but I won’t mention those names anyway. But one of the f***ing guys was so excited to reveal gossip about who was f***ing around on who that he goddamn ended up f***ing starting to tell one of the people that the story was about and had to f***ing change it on the fly to other people which then that person went and repeated that story to somebody else but with other people in it named who then heard about that and there was something actually going on which then was outed and it was a whole goddamn big deal. You never know about these things. You should stay away from gossip, that’s what I think. Again, if she was mad at Caster or The Acclaimed or we got something with I don’t know, AEW Talent, then I would’ve thought it was a work, but now that I’m hearing it. Jeff Jarrett would have booked a better angle (if this was a work), no pun intended. So, I’m thinking this might not be a work, I’m thinking this might be a raw nerve that was struck somewhere.”