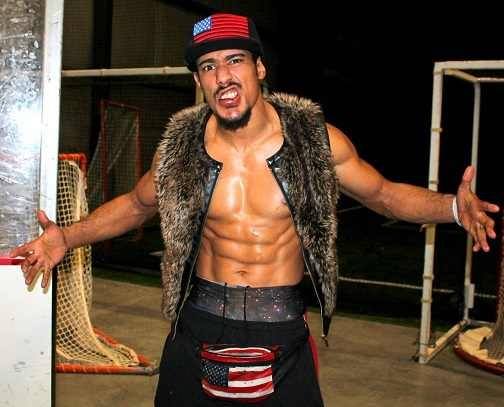 “It’s unbelievable to me,” Fox responded. “I don’t think I have the words to describe it. I grew up about ten minutes down the road, and I had my mother in the crowd here for a moment that I thought I might never reach. So… I’m just waiting to be alone, so I can cry.”

Dante then commented on being able to team with an indie legend like Fox, and topping it off by getting the other half of Top Flight back. Darius said it felt great to be back in the ring. He commented on how he and his brother debuted for AEW, then he tore his ACL and spent a year on the shelf, but then had the car accident where he “fractured a lot of stuff.” Darius said it felt unreal to be back in 7 months and be able to take it to a team like Death Triangle.

Nair then informed Fox that she just received word on how AEW President, CEO, General Manager & Head of Creative Tony Khan has offered a contract to Fox, who seemed genuinely surprised. Top Flight clapped while a stunned Fox thanked Nair.

The 35 year old Fox began wrestling in 2007, and has had runs with CZW, EVOLVE, Dragon Gate USA, Lucha Underground, and numerous indies. Fox made his AEW debut at the July 20 Elevation tapings, teaming with Liam Gray and Adrian Adonis for a loss to Private Party and Angelico. Since then he has worked 6 more AEW matches – a loss to Ari Daivari on Dark, a loss to Dante on Dark, teaming with Caleb Konley for a loss to Eddie Kingston and Ortiz on Dark, a loss to AEW World Trios Champion Rey Fenix on Dark, a win over Serpentico on Elevation, and last night’s Dynamite.

AEW has not confirmed that Fox is signed as of this writing, but we will keep you updated.