Update on the PPV buys for ROH’s Death Before Dishonor 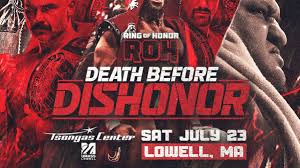 It was previously announced by AEW CEO Tony Khan that ROH Death Before Dishonor had an initial estimate of 25,000 PPV buys. However it seems the show was more successful than that. The Wrestling Observer Newsletter reports that that this show had 36,100 buys, including 27,000 digital and 9,100 from TV.

It had 3,100 in attendance, with 2,900 paid. This is the fourth-largest crowd in ROH history behind the G1 Supercard at Madison Square Garden, a show in New Orleans (headlined by Kenny Omega vs. Cody Rhodes) and another show in Lakeland, FL (headlined by The Young Bucks vs. The Hardys in a ladder match).

Tony Khan in the media scrum says the Death Before Dishonor PPV is “approaching 25,000 buys just digitally” not including traditional buys. He says the event is
4th biggest live attendance for ROH history. Highest attendance for a non-Wrestlemania weekend event.