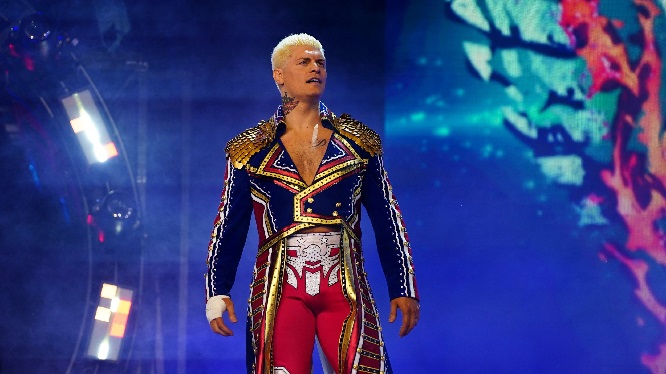 WWE has confirmed the injury to Cody Rhodes.

Tonight’s WWE Hell In a Cell Kickoff pre-show opened up with Kayla Braxton announcing the update on Rhodes. Braxton noted that rumors say Rhodes suffered a complete right pectoral tendon tear during the RAW brawl with Seth Rollins on Monday night, but she then explained that Rhodes suffered just a partial tear on RAW.

Braxton then noted that while Rhodes was weight training on Friday, preparing for tonight’s match with Rollins, the tendon tore completely off the bone.

There was no timetable given for Rhodes’ return, but it was confirmed that he will step inside the Cell with Rollins tonight.

The recovery time for a torn pectoral muscle can be anywhere from a few weeks or months, up to a year, and a complete tear could have Rhodes out of action for 6-12 months as we’ve seen with other wrestlers in the past.

As we’ve noted, the original report, via Wrestling Observer Radio, was that Rhodes suffered the injury while weight training this past week. It’s likely that he was not injured during the RAW brawl with Rollins, despite what WWE said in their update. Rhodes defeated Rollins in the post-RAW dark main event on Monday night. Rhodes vs. Rollins in a Street Fight was then scheduled for Saturday’s WWE live event in Champaign, IL, but Rhodes was pulled from the match due to the injury. Rhodes ended up appearing for an angle with Rollins, and he was backstage, which is how word on the injury got out among the wrestlers.

BREAKING: @CodyRhodes suffered a partially torn right pectoral tendon during a brawl with @WWERollins this past Monday on #WWERaw.

While weight training in preparation, the tendon tore completely off the bone.

However, Rhodes has vowed to still step inside #HIAC tonight. pic.twitter.com/gpl2S8ilPI