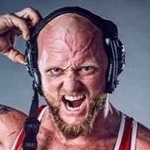 Join us tonight for up to the minute results from Impact Wrestling.  Coverage begins at 8pm.

We get a vignette for the Gauntlet for the Gold.  Who will be the #1 Contender for the Impact World Championship?  The story will continue tonight.   Mathew Rehwoldt and Tom Hannifan are once again on the call.

The match starts off scientifically with a high flying twist.  Neither really gain an advantage until the match spills to the floor.  Bailey nails Kid with a few kicks and tosses him back in.  The fans love Speedball and start chanting his name.  He drops two knees from the top rope for a two count.  After a chop in the corner, Kid strikes back with a series of kicks and a cutter.  Kid took a dangerous backflip to the floor.  He connected with Bailey, but was close to nailing the barricade.  After a series of moonsaults, Kid gets a two count.  Bailey wins a backslide battle, but they roll to the floor threw the ropes.  Bailey hits a missile drop kick off the top and then a running corkscrew shooting star press for a two count.  Kid blocks a Yes kick and leg whips Bailey.  Bailey recovers and hits a tornado kick, but misses a moonsault from the top.  Kid plants Bailey with a driver for a two count.  Kid goes to the top and Bailey follows him.  They jockey for position.  Kid hits a sunset flip, but Bailey rolls threw and then kicks Kid soundly and rolls up Kid for the pin.  It looks like Bailey’s legs may have been under the ropes.

Matt Cardona and Chelsea Green cut a promo from their Honeymoon.  He says Rich Swann isn’t worthy of being a contender for his Digital Media Championhip.

Grace and Purrazzo start the match.  They trade arm twist.  They tag out to Taya and Tasha.  Taya takes her down and hits a series of back elbows and kicks in the corner.  After a double knee splash, Taya gets a two count off a spinning blue thunder bomb.  We go to break.

Grace has a delay vertical suplex on Steelz as we return.  The crowd counts to 30 before he drops Steelz with a jackhammer.  Evans and Purrazzo interfere.  Purrazzo tags in and gains control.  Evans comes in next and butterfly suplexes Grace.  Steelz tags back in and works Grace over in the corner.  She then connects with a running punt kick to the face.  Grace reverses an exploder suplex.  Grace hits a blackout and Yim tags in.  She dropkicks Steelz all over the ring.  After a cannonball, Yim gets a two count off a driver.  Deonna makes the save.  Valkyrie then enters as does Evans.  They all battle with Purrazzo downing Yim with a pump kick.  Evans and Yim are now the legal people in the ring.  She sets up Evans, and Taya tags in for a double team.  Yim cleans up the win and gets the pin on Evans.

Locker Room Talk is back with Madison Rayne and Tenille Dashwood.  They brag that they got rid of The Inspiration.  Johnny Swinger and Zicky Dice enter.  They have a few one liners and Rosemary and Havok show up.  Dice and Swinger love the girls mixing it up in a verbal exchange.  Dashwood and Madison brag about beating them.  Havok then shoves Zicky on top of Swinger.  Madison wraps up the show.

Chris Sabin is interviewed backstage by Gia Miller.  He then challenges Frankie Kazarian to match, in a rematch from the Battle of the Futures, 20 years ago.  The match will be next week.  They show part of the match.  Frankie won with a Spanish Fly.

Eric Young has vignette backstage.  He talks about seeing Wrestlemania 3.  Eventually joining Impact with Bobby Roode.  They show team Canada and his rise to from a comedy act to World Champion.  Every thing they gave him, he took and ran with it.  Then he talks about being treated like garbage in WWE.  He says the version he is now is who he is.  He will challenge Josh Alexander for the World Title.

Josh cuts a promo with Gia backstage.   He claims he will usher in the next generation of Impact Wrestling.  He then tells EY to be ready for the fight of his life.

Maria Kanellis joins the announce team.  The rest of the BC and HNM walked out on the ramp, but didn’t come to ringside.  Bennett and Anderson start things off.  These two have a history over Maria.  Tom asks her about her relationship with Anderson.  Maria dodges the question.  Doc and Karl double team Bennett.  Bennett rakes the eyes of Doc and Taven tags in.  The bounce the ropes, Doc catches him and powerbombs him.  Karl tags in he gouges Taven’s face.  Bennett and Taven double team Anderson and toss him neck first into the top rope.  Bennett then crosses the ropes several times and finishes with an eye poke.  Taven missiles Karl off the top after tagging in.  Taven and Bennett trade tags and work over Anderson.  Gallows really wants in.  Anderson hits a spine buster.  Both are down, but make a tag.  Doc takes Taven off his feet several times.  Doc hits a form of a cutter and Bennett makes the save.  Bennett then breaks up a Magic Killer on Taven.  Taven moonsaults Doc for a two count.  Bennett is split open.  Taven mistakenly kicks Taven.  Anderson and Gallows hit a double neck breaker.  Maria then distracts Anderson’s pin.  Anderson and Maria argue and Bennett charges Anderson, who moves and Bennett spears his wife.  After a Gun Stun by Anderson, and The Good Brothers get the pin.

Sami Callahan has a vignette centering about Moose and how he broke his leg.  Sami says the Death Machine is coming for Moose.

The local Cincy indy wrestler, Reed is destroyed.  Slamovich hits a snow plow and it is over.

Post match the lights go out and Havok enters.  They have a stare off in the ring as the segment ends.

Slammiversary will pay tribute to TNA this year.

Shera and Raj Singh cut a backstage promo on Bhupinder Gujjar.  BG walks in W. Morrissey and this sets up a match next week.

Doering and Mark start the match.  Mark is outmatched and tags Jay.  Jay shoulders Doering, but Joe shrugs it off and clubs him several times.  Deaner tags in and lays in some offense, but Jay hits a back elbow and makes the tag.  Mark suplexes Deaner.  The next few mins the champs double team Deaner all over the ring after quick tags.  Deaner can’t get out of the Briscoe’s corner.  Mark drop kicks Deaner to the outside and hits a neck breaker off the apron.  Doering senses Jay getting ready to fly to the floor, and crosses his path and slams Jay to the mat.  We go to break.

Doering slams Jay as we return.  Doering is finally making his presence, as The Briscoes did a great job of keeping Deaner in.  EY finally interferes on the outside.  Deaner and Joe make a few tags, keeping Jay in trouble.  Jay loses it and fights free and Mark tags in.  He takes out Joe Doering and Deaner.  He sets up Deaner on the top and crosses his arms and hurls him to the mat.  Mark goes up to the top, Mark chops him from the top.  The Briscoes get a two count off the neck breaker/powerbomb.  Doering plants Mark on the steal post.  Doering is now the legal man and hits a spine buster on Jay for a two count.  Deaner gets a two count off a flying, top rope headbutt.  Mark makes the save.  Jay takes Doering out to the floor.  Jay hits a rolling elbow on Deaner.  They set up the Doomsday, but Doering stops it.  Jay rolls up Deaner though and they get the pin.

VBD attack the champs post match.  Josh Alexander enters and clears the ring of Doering and Deaner.  EY and Josh stare at each other and smile.  Deaner and Doering attack Josh from behind, but the recovered Briscoes make the save and all the champs celebrate in the ring.