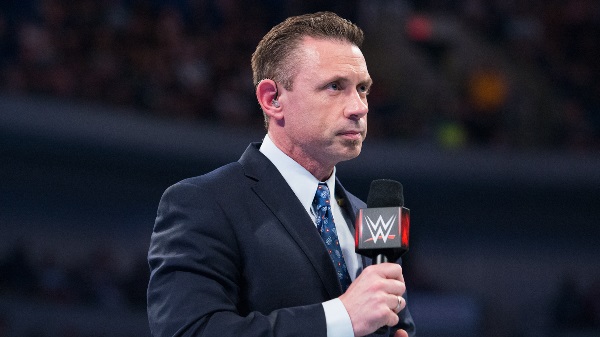 WWE SmackDown commentator Michael Cole recently appeared on The Press Box podcast and talked about the hearing issues he’s dealt with, noting that he has to wear special molds while at the announce table.

We noted back in November how Cole appeared on The Pat McAfee Show and revealed that he’s at around 65% hearing loss. In this new interview, Cole talked more about the hearing loss and how he gets through WWE tapings.

“Yeah, I need to hear myself when I broadcast, and it has to be loud,” Cole said. “I think over 25 years of doing that, it’s just deteriorated the hearing where I have these special molds that have been made for me that go into my ears, that I wear my headsets over, and it increases the volume of what I can hear during the show. So they’re almost like hearing aids for ringside commentators.”

Cole also talked about working with Pat McAfee, noting that the former NFL kicker makes everyone around him better, and makes everybody around him want to enjoy the product. Cole said he hired McAfee a few years back to work on WWE NXT panels, and eventually knew he would be a huge hit.

“He is the most energetic and enthusiastic person I’ve ever been around. He makes everyone around him better. He makes everybody around him want to enjoy the product,” Cole said of McAfee. “Pat and I have developed an insane amount of chemistry. I hired Pat five years ago to do some panel work for NXT pre-shows, brought him on board last year, and knew he was going to be a huge hit. I was shocked that he actually wanted to come work for us and work with me.

“He’s just an incredible guy to work with. He’s a fan, and you can tell that he’s a fan when you listen to him. He’s just so over the top and so excited and so energetic. He’s the classic extrovert, and I’m the classic introvert, and that’s why it works so well together and we’ve become so extremely close.”

Cole will call the action at WrestleMania 38 this weekend, while McAfee will wrestle Austin Theory on WrestleMania Sunday.

(H/T to WrestlingNews for the quotes)