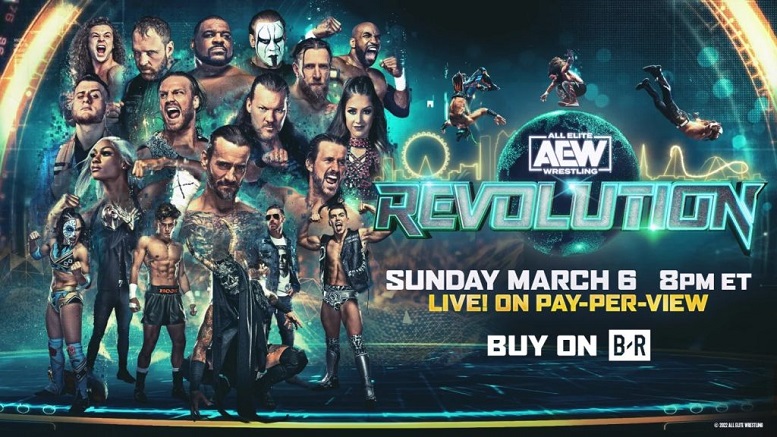 Excalibur and Tony Schiavone are on commentary, and they run down the card for the show.

The video package for the feud between CM Punk and MJF airs.

Tony Schiavone is in the ring, and he introduces a special guest. Kenny Omega’s music hits, but Don Callis comes out instead. Callis said the people were the cause of all of Omega’s injuries and they sucked the blood out of him when they kept begging for great matches. Callis says he is disgusted by all the violence on this show tonight, so he decided to not have Omega appear. Callis said it will be a great night for The Elite, because he expects The Young Bucks to win the tag titles, and Adam Cole to win the world title. He says Cole will make a great transitional champion up until the second that Omega comes back and regains his place as the AEW World Champion. Callis says the only diamond in the business is Kenny Omega.

The video package for the feud between Bryan Danielson and Jon Moxley airs.

Taz joins the commentary team for the next match.

The video package for the feud between Adam Cole and Adam Page airs.

Excalibur and Tony Schiavone run down the card for Revolution once more, and the video package for the feud between Chris Jericho and Eddie Kingston airs.

Jim Ross joins the commentary team as The Buy-In comes to a close.

Taz joins the commentary team for the next match.

Face of the Revolution Ladder Match: Orange Cassidy vs. Wardlow vs. Keith Lee vs. Christian Cage vs. Powerhouse Hobbs vs. Ricky Starks
Everyone except Cassidy starts the match in the ring, and Starks and Cage quickly get tossed to the floor. Cassidy gets in the ring and delivers his kicks to Lee, Wardlow, and Hobbs. Wardlow and Hobbs go after him, but he ducks and Lee grabs them. Cassidy climbs on their backs to grab the brass ring, but he is dumped to the mat. Starks and Cage come back and ladders get introduced. The ring gets cleared except for one ladder and Cassidy, and he climbs the ladder with his hands in his pockets. Cage cuts him off and sends him to the floor. Cage sends Starks to the floor and pulls the ladder under the brass ring, but Hobbs trips him up. Hobbs climbs the ladder and touches the brass ring, but Cage cuts him off and delivers a reverse DDT from the ladder. Cage pulls the ladder out of the way, but Lee appears on the apron and deliver a shot. Starks comes back, but Lee drops he and Cage with a double cross-body. Cassidy comes off the ropes, but Lee catches him and uses him as a battering ram to wipe everyone out. Lee grabs the ladder and sets it up. Lee climbs up, but Wardlow cuts him off. Lee climbs down and shoves the ladder over.
Hobbs comes back and lays Wardlow and Lee out with the ladder. Hobbs sets the ladder up and Starks comes back. They slap hands and race up the ladder, but Cassidy shoves it over. Cassidy puts the ladder around his head and uses it as a helicopter to lay everyone out. Wardlow and Lee stop him and they powerlift the ladder and Cassidy. Cassidy flips on top of the ladder and reaches for the brass ring, but they cause him to crotch himself on the ladder and drop him to the mat. Wardlow gets takes out, and then Hobbs smashes Lee with the ladder in the corner. Hobbs throws Cassidy onto the ladder and into Lee, and then drops Cassidy with a delayed vertical suplex from the ladder. Cage puts a ladder in another corner and takes Hobbs out. Cage sets the ladder up, but Starks steals it. Starks delivers a kick and drops Cage with a Spear through the ladder. Starks drags the ladder over and climbs up. Wardlow tips the ladder over and pulls it back up, causing Starks to slam into it. Wardlow sets up a ladder and begins to climb. Starks jumps on his back, and then Cassidy jumps on Starks’ back. Wardlow still climbs as Hobbs climbs the other side.
Wardlow shoves Starks and Cassidy off and climbs, and Lee climbs another ladder next to them. Starks, Cassidy, and Cage climb, as well, and then Cassidy gets knocked down. Cage gets sent to the floor, and then Starks and Lee get knocked down. Wardlow and Hobbs both grab the brass ring and they exchange shots on top of the ladder and both fall to the mat. Wardlow, Hobbs, and Lee shove the ladders out of the way and stare each other down. Cassidy is in the ring, and then Lee tosses him onto Starks and Cage on the floor. Wardlow sends Hobbs to the floor with a clothesline, and then does the same to Lee. Wardlow follows them out and stomps them on the floor. Wardlow and Hobbs double-team Lee and they delivers shots to him up the ramp. Hobbs and Wardlow rip a ladder in half and brings the sides down the ramp. Hobbs hits Wardlow with his half, and then hits Lee as well. Hobbs chokes Lee by the announcer’s desk, but Lee fires up. Wardlow comes back and sends them both off the stage with a shoulder tackle. Back in the ring, Cage is setting up ladders. Starks comes back in with a low blow to Cage and climbs the ladder.
Danhausen appears in the ring and curses Starks as Wardlow gets in the ring. Cage pulls Wardlow to the outside as Danhausen leaves the ring. Cage begins to climb, but Starks cuts him off and sends him to the mat. Wardlow power bombs Cage and jumps on the ladder that Starks was climbing. Wardlow power bombs Starks on a ladder that was draped between the ropes and the standing ladder, and then grabs the brass ring.
Winner and #1 contender for the AEW TNT Championship: Wardlow

Tony Schiavone is on the stage with a contract for a new wrestler, Shane “Swerve” Strickland. Strickland signs the contract and says the realest is back. Strickland says he can go on and on about the matches he is going to have in AEW, but he only has one question: whose house? The crowd answers with “Swerve’s house” and he says he loves them, too.

The video package for the feud between CM Punk and MJF airs.

The video package for the feud between Dr. Britt Baker, D.M.D. and Thunder Rosa airs.

The video package for the feud between Bryan Danielson and Jon Moxley airs.

Tony Schiavone is on the stage and he runs down the card for this upcoming Wednesday’s Dynamite:

Tornado Trios Tag Team Match: The A.H.F.O. (Matt Hardy, Andrade El Idolo, and Isiah Kassidy) (w/Jose the Assistant) vs. Sammy Guevara, Darby Allin, and Sting
All six men brawl from the start. Weapons are introduces and Allin and Sting set Jose in a chair and put a trash can over his head. Allin dives through the ropes and takes Jose out, but then Idolo hits Allin with a chair and hits Sting with the trash can. Idolo tosses Guevara into the crowd and Hardy gets Sting in the ring. Hardy and Kassidy deliver shots to Sting, but Allin and Guevara double suplex Idolo on the floor. Sting comes back with trash can shots to Hardy as Guevara drops Kassidy with a cutter. Guevara sends Kassidy to the outside, but then Idolo does the same to Guevara. Idolo drops Sting with a dropkick, and then slams Allin into the corner. Idolo puts Allin up top and clubs him in the back. Idolo hangs Allin upside down, but Guevara comes back and tries to save him. Idolo shoves Guevara away and hits a double stomp on Allin. Hardy slams Guevara down and goes for the cover, but Sting breaks it up. Hardy and Sting brawl to the floor as Idolo throws Allin out of the ring. Sting drops Hardy with a shot, and Allin dodges a dive from Idolo. Sting kicks Hardy in the midsection and slams him into the barricade.
Guevara goes for a springboard, but Kassidy throws a chair at him. Marq Quen appears at the barricade, and he and Kassidy drop Guevara with Silly String. Sting grabs a chair and beats Hardy into the crowd with it. Allin and Idolo are with them, and Hardy gets slammed into the retaining wall by Sting. Idolo is down, as well, but The Butcher and The Blade come out and attack Sting and Allin. Butcher slams Allin into the retaining wall as Private Party set Guevara on a table on the stage. Kassidy is up top, but Guevara gets up and lays out Quen with a superkick. Guevara climbs up with Kassidy and picks him up. Kassidy fights out, but Guevara delivers shots. Guevara delivers an avalanche Spanish Fly from the platform and through one of the tables. The Butcher and The Blade stack tables in the crowd area, but Sting fights back and delivers shots to them. Idolo hits Sting with a light cover and Hardy delivers a low blow to Sting. Hardy drags Sting away and higher into the crowd. Idolo and Allin brawl on the tables as Hardy and Sting are right above them. Sting delivers shots to Hardy and Allin beats Idolo down onto the tables. Sting dives onto Idolo and they crash through the tables.
Hardy grabs Allin and they go back to ringside. Hardy tosses Allin back into the ring and grabs a chair. Hardy hits Allin with the chair and sets it up. Hardy puts Allin’s head in the chair and goes for a Twist of Fate, but Allin counters and slams the chair into Hardy’s throat. Allin delivers a Scorpio Death Drop on the chair and hits the Coffin Drop on Hardy for the pin fall.
Winners: Darby Allin, Sammy Guevara, and Sting

The video package for the feud between Adam Cole and Adam Page airs.