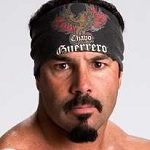 Veteran pro wrestler Chavo Guerrero Jr. took to Twitter today and deleted his initial reaction to being removed from the AEW roster.

Guerrero has been in Australia to film the second season of NBC’s “Young Rock” show, based on the life of WWE Legend The Rock. The second generation wrestler works as a wrestling coordinator on the NBC series. Guerrero was recently removed from the AEW roster page, and a fan on Twitter pointed this out. Guerrero responded and claimed AEW President, CEO, General Manager & Head Of Creative Tony Khan told him his job would be there when he returned from filming the show.

“That’s news to me! I guess having @TonyKhan telling me to go film Young Rock Season 2, & my job will be waiting for me when I’m done, didn’t mean much,” Chavo wrote.

Guerrero deleted that tweet not long after posting it.

However, Guerrero later responded to another tweet that said he was removed from the official AEW roster page, and this tweet is still live.

Guerrero signed with AEW in July 2021, and served as the “executive consultant” to Andrade El Idolo. Guerrero was written out of the storylines on the September 10 edition of AEW Rampage after an attack by Andrade, and then Death Triangle, so that Guerrero could go film for “Young Rock” in Australia.

It was reported back in September that when Khan signed Guerrero to work with Andrade, and “Young Rock” was renewed for a second season, they came up with an agreement where Guerrero would work through the AEW All Out pay-per-view and then they would blow off the character. It was noted then that Guerrero was expected to return to AEW once filming wrapped.

There’s no word on if AEW has plans to bring Guerrero back, but we will keep you updated.

Stay tuned for more. You can see Guerrero’s tweet below:

News to me. 🤷🏻‍♂️ RT @AEWmetrics: Reporting a fact: