MMA and pro wrestling star Cain Velasquez is still in jail and has been charged with attempted murder.

As noted, there was a shooting near San Jose, CA on Monday, and San Jose police said Velasquez was involved. The shooting happened around 3:14pm local time, in Morgan Hill, near Monterey Highway and Bailey Avenue. Police would not confirm Cain’s role in the incident, but one man was taken to the hospital with non-life threatening injuries, and another man was arrested. Court records revealed that Cain was in the Santa Clara County jail, with no bond, but no other details were available at that time.

In an update, TMZ Sports reports that Velasquez has been arrested and booked on an attempted murder charge. Police confirmed that he was the suspect in the alleged shooting incident on Monday in San Jose.

“The motive and circumstances surrounding this incident are still under investigation at this time,” police added.

You can see Cain’s mugshot photo below.

Details on the incident have not been released, but the 39 year old Velasquez was involved in the shooting that happened near a high school on Monday.

Jail records show that Velasquez is still being held with no bond, at the main Santa Clara County jail facility on West Hedding Street in San Jose. He has a court date scheduled for Wednesday at 12 noon.

Velasquez fought MMA from 2006 until his retirement in October 2019. He is a two-time UFC Heavyweight Champion, and retired with a record of 14-3. A longtime pro wrestling fan, Velasquez made his in-ring debut at AAA’s TripleMania XXVII in August 2019, teaming with Cody Rhodes and Psycho Clown for a win over Killer Kross, Black Taurus and Texano Jr. He later worked AAA/Impact’s Lucha Invades NY show at Madison Square Garden that September, teaming with Brian Cage and Psycho to defeat Taurus, Texano Jr. and Rey Escorpion. Cain first worked out at the WWE Performance Center in July 2018, but he signed a deal with WWE in October 2019 and began feuding with current WWE Champion Brock Lesnar. Cain made his WWE in-ring debut at Crown Jewel 2019 in Saudi Arabia, losing to Lesnar. He then worked a WWE live event in Mexico City on November 30, teaming with Humberto for a win over current Impact World Tag Team Champion The Good Brothers. Cain was set to work the 2020 Royal Rumble but plans were nixed due to an injury, and WWE then released him from his contract on April 28, 2020 along with other budget cuts. Cain returned to AAA this past December at TripleMania Regia II, teaming with Psycho and Pagano for a six-man win over Taurus, Escorpion and LA Park.

Velasquez has not released any kind of statement through his team as of this writing, but we will keep you updated.

Stay tuned for more. You can see Cain’s mugshot photo below, courtesy of TMZ Sports: 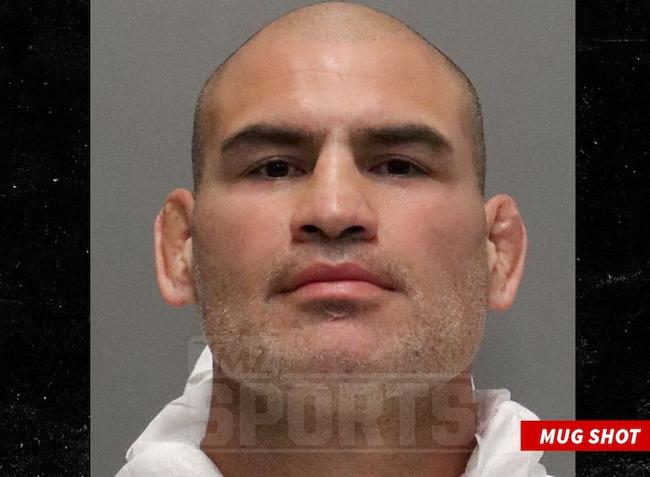