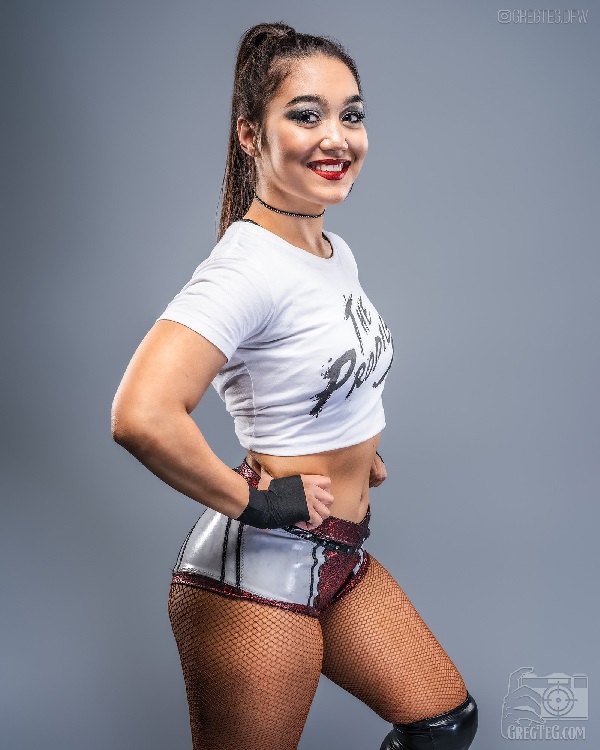 WWE Hall of Famer Booker T has issued a statement on his previous comments about WWE signing Rok-C.

As noted earlier, Booker appeared on The MMA Hour with Ariel Helwani this week and announced that WWE has signed 20 year old Rok-C, his former student who became the inaugural ROH Women’s World Champion back in September. There had been a push within WWE to sign Rok-C as she impressed officials at a tryout camp back in December, and then worked another recent WWE Performance Center tryout. It was reported last week that WWE had offered Rok-C a contract, and then Booker stated this week that she was signed.

In an update, Booker took to Twitter on Friday night and issued a correction.

“There’s an article going around saying I confirmed Rok-C signed a contract to WWE, I misspoke on that… but they better sign her dammit!,” he wrote.

It seems like Booker may have been asked to retract his original statement because WWE has not officially announced the next class of recruits, who are scheduled to report to the WWE Performance Center in a few weeks, but that has not been confirmed.

For those who missed Booker’s earlier comments, he talked with Helwani about AEW signing A.Q.A (fka WWE’s Zayda Ramier), and then mentioned that WWE has signed Rok-C.

“One of my girls just debuted on AEW Dynamite with Jade Cargill, her name’s AQA. They just signed her to a contract, it’s really, really cool,” Booker T told Helwani. “One of my girls, Rok-C, WWE just signed her. She was my youngest champion in Reality of Wrestling. Started with me in fantasy camp. She was 13 years old — her dream was to be the Reality of Wrestling Champion. You know, I got guys out there floating around all over the world right now. That’s my passion — literally that’s my passion, just working with young guys from an in-ring perspective, from a mental perspective, from just a life perspective. I don’t know why, but it gives me purpose.”

There’s no word yet on what led to Booker’s correction, but we will keep you updated.

Real name Carla Gonzalez, Rok-C began training in the ring at age 13, then at the age of 16 she moved on to Booker’s Reality of Wrestling school and promotion, where she is a one-time ROW Diamonds Division Champion. She made her pro debut in December 2018, and was trained by Booker, Daga, Gino Medina, Johnny Angel and George Benavides. Rok-C became the inaugural ROH Women’s World Champion back in September by defeating Miranda Alize in the finals of a tournament to crown the first-ever champion. She made eight successful title defenses before dropping the strap to AAA Reina de Reinas Champion Deonna Purrazzo in a “Winner Takes All” match on Impact Wrestling last month. Rok-C then made her MLW debut at the recent Blood & Thunder tapings on January 21, going up against Miranda Gordy.

Rok-C has not publicly commented on the WWE contract reports. She will return to the ring this Saturday for Booker’s ROW promotion in Texas City, TX as she faces Raychell Rose.

Stay tuned for more on Rok-C. You can see Booker’s full tweet below:

There’s an article going around saying I confirmed Rok-C signed a contract to WWE, I misspoke on that… but they better sign her dammit!