WWE has filed several YouTube copyright strikes against Griselda Records for some of their singles.

The songs removed for copyright claims are Claiborne Kick, The Hurt Business, French Toast, and Allah Sent Me. These songs include snippets of WWE audio and interviews.

There’s no word on if WWE knew of the copyright strikes before they were actually made as they often have third party contractors make DMCA complaints for them.

It’s interesting to note that WWE has recently removed a NXT video and tweet on Gunn. Gunn appeared on NXT TV last month and made the special trip there just to see the in-ring debut of Harland. WWE tweeted a shot of Harland greeting Gunn during his entrance, and later posted a backstage interview to YouTube with Gunn talking to McKenzie Mitchell about being a WWE fan. The video has been set to “Private” on YouTube, and the tweet has been deleted.

Gunn made headlines back in late October when former WWE ring announcer Greg Hamilton threatened to sue him, using WWE lawyers, for using his voice on a track. This was shortly before Hamilton was released from his WWE contract.

Gunn has not commented on the copyright strikes as of this writing. You can see the screenshot from Griselda Records below: 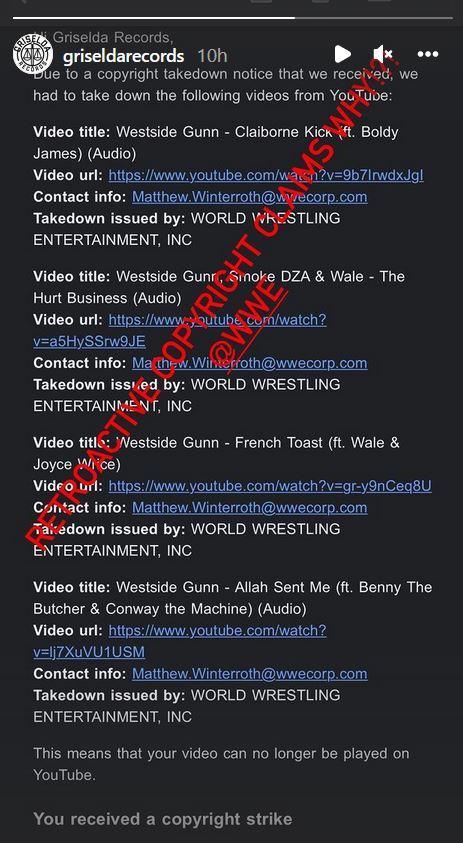