Nov. 17 marked the 25-year anniversary of The Rock’s debut for WWE at Survivor Series 1996 at Madison Square Garden.

Performing as “Rocky Maivia” in a 4-on-4 elimination tag match, Maivia led his team to victory. It was the start of a historic sports entertainment career that eventually led to The Rock becoming one of the biggest movie stars of the 21st century.

WWE paid homage to The Rock by airing several clips of his career with the company during the Survivor Series 2021 broadcast. There was some anticipation that the wrestler-turned-actor would make a special appearance at the show, but it never transpired.

On F4WOnline.com Andrew Zarian reported that the initial plan was for The Rock to appear at Survivor Series. Zarian heard in July that the event “would be centered around” The People’s Champion. 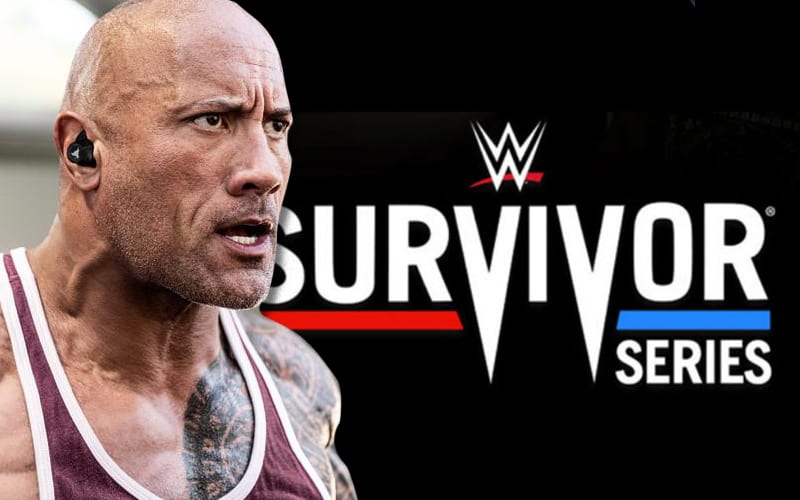 Zarian also reported that WWE hoped to have The Rock for the following day’s episode of Monday Night Raw, which was said to be “dependent on his schedule.”

A source told Zarian that The Rock wouldn’t be able to make Survivor Series 2021 “due to his filming schedule and needing to quarantine for travel.”

Future WWE betting odds and props — including the Royal Rumble winners — will be available in the coming weeks. Right now, nine states are offering a first bet match Caesars sportsbook promo code of up to $1,001.

Following the Oct. 22 episode of Friday Night SmackDown, reports stated that Becky Lynch and Charlotte Flair were involved in a heated backstage confrontation.

Flair was reportedly unhappy over the title-exchanging segment with Lynch, fearing it would make her “look weak.” The latter has since confirmed that the altercation did happen, and Lynch doesn’t believe their friendship will be repaired

Back in March, Flair’s real-life fiancé Andrade El Idolo, was released from his WWE contract (which he requested). Her father, WWE Hall of Famer Ric Flair, also sought and received his release from the company.

But none of this means that the SmackDown Women’s Champion is eyeing a WWE exit herself. Charlotte poured cold water over such speculation during an appearance on The Masked Man Show (h/t WrestlingInc.com).

In the Nov. 1 edition of the Wrestling Observer Newsletter, Dave Meltzer reported that Flair has “more than a year” remaining on her current WWE contract.

So in short, don’t expect The Queen to leave WWE any time soon.

The next one, “Day 1”, will take place on New Year’s Day at State Farm Arena in Atlanta, Georgia. With over a month to go until the event, it could be multiple weeks until we get an idea as to what the card will look like.

But it’s not too early to predict what the major matches will be for Day 1.

There’s a strong lack of main event babyfaces on the SmackDown roster. It wouldn’t make much sense to run Brock Lesnar vs. Roman Reigns again before the Royal Rumble, so McIntyre makes the most sense as the next challenger.

McIntyre and Reigns put on a clinical performance at Survivor Series 2020, which the latter won via pinfall. The former WWE Champion has been booked strongly since moving to SmackDown in last month’s WWE Draft.

WWE would be wise to run McIntyre vs. Reigns as soon as possible.

WWE has moved away from the Lynch-Bianca Belair feud. They have all the time in the world to rekindle that program, so it makes sense to give The Raw Women’s Champion a new opponent heading into the new year.

Like McIntyre, Ripley has been booked very strongly since the Draft. WWE has yet to run this program since Ripley joined the main WWE roster, so why wait?

It’s tough to envision Big E losing his WWE Championship before the Jan. 1 pay-per-view. He’ll presumably keep it for at least another month (likely longer), and The Architect appears to be next in line to challenge for the title.

Rollins won a ladder match to become the new No. 1 contender for Big E’s WWE Championship. WWE has spent several weeks building up this feud, with Rollins even playing a hand in Kevin Owens’ heel turn. A match between The Power of Positivity and Rollins at Day 1 would be the perfect way to start off the new year.

This one feels like a safe bet to happen. Flair and Banks have been feuding on SmackDown for over a month now. The Legit Boss interrupted the aforementioned Flair-Lynch title exchange segment on the Oct. 22 show.

Unless WWE creative has a sudden change of plans, they’ll presumably continue building up the Banks-Flair feud for a title match at Day 1.