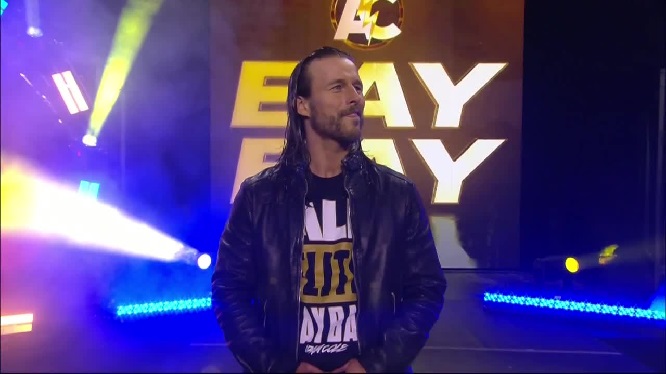 This week’s AEW Dark saw Greene defeat Jameson Ryan in singles action, picking up his first win with the company. After the match, Tony Schiavone interviewed Greene in the ring and revealed that AEW President Tony Khan has booked Greene vs. Cole for next week, due to Greene making strides and finding success since starting with AEW. You can see that in-ring interview below.

Greene told Schiavone that he was feeling good, but now he’s feeling great. He then addressed Cole and said he didn’t come to AEW for a one-and-done, he came to work with the best wrestlers in the world and now “The Alternative” is going straight to the top.

Greene, formerly known as August Grey, signed with WWE on August 2, 2020 but was released on June 26 of this year. He debuted on AEW Dark in September of this year, losing to Evil Uno. Since then he has teamed with Stallion Rogers for a Dark loss to AAA World Tag Team Champions FTR, teamed with Bear Country for a Dynamite six-man loss to Jon Moxley, Eddie Kingston and Darby Allin, and then lost to Bobby Fish on Saturday Night Dynamite in October.

Next week’s match will mark Cole’s debut on the AEW Dark show. The bout was taped back in late October at Universal Studios in Orlando, and you can find full spoilers from the taping at this link.

After notching his first win and showing great strides, #AEW GM @TonyKhan has booked @alternative_ag vs @AdamColePro NEXT WEEK on #AEWDark, and Anthony Greene plans to make the most of the opportunity. Tune in NOW: https://t.co/Gxg9beb7C6 pic.twitter.com/sEvO7z8U6T