This Day In Wrestling History – November 14 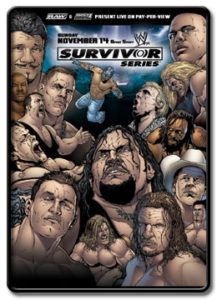 1999 – WWF Survivor Series is held in Detroit, in front of 18,735 fans.  The event saw Stone Cold Steve Austin get run over by a car, which led to him being replaced in the main event by Big Show.  Survivor Series ’99 also featured the debut of Kurt Angle.

2005 – On the day after his death, this evening’s Monday Night RAW is a tribute show to Eddie Guerrero.  Feuds were put on hold and no wrestlers were forced to compete.

2008 – At Ring of Honor’s Driven pay-per-view, Kevin Steen & El Generico defeat The Age of the Fall (Jimmy Jacobs & Tyler Black), to win the ROH World Tag Team Championship.  The event originally occurred back in September, and was airing on pay-per-view on tape delay.

2017 – On SmackDown Live, in her hometown of Charlotte, NC, Charlotte Flair defeats Natalya, to win the SmackDown Women’s Championship.