This Day In Wrestling History – October 27 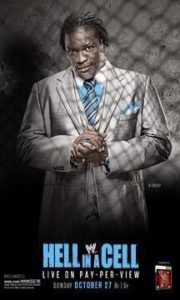 *If you read nothing else from this post, at least scroll down to the very bottom past the birthdays.*

1990 – NWA Halloween Havoc is held at the UIC Pavilion in Chicago, in front of 8,000 fans.  This was the final Halloween Havoc promoted by NWA, with future events being promoted exclusively by World Championship Wrestling.

2003 – On Monday Night RAW, Chris Jericho defeats Rob Van Dam, to win the WWE Intercontinental Championship.  After the match, ‘Sheriff’ Steve Austin came out and ordered that Jericho’s first rematch would be against Van Dam in a Cage Match.  Van Dam defeats Jericho in the rematch, to regain the title.

2012 – The NWA World Heavyweight Championship is vacated by Adam Pearce, after the NWA refused to allow Pearce to defend the title, in the deciding match of his best-of-seven series against Colt Cabana.

One more thing…..from HOMAGE, a clothing retailer based out of Columbus, Ohio.