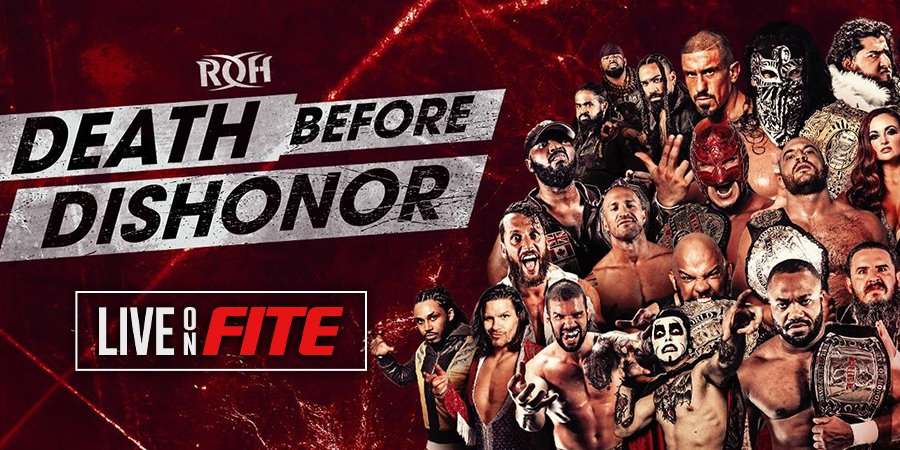 Castle is out with a big reaction. Fun match to start the show.The crowd was a bit split on who they were supporting which speaks to both men and their popularity. Castle wins with a distraction and a band a rang to win.

Jake Atlas in ROH in wonderful and im glad that hes getting to get some time on pay per view with them. Very fast paced match early on and they are really out here putting on a great performance Both men brawl on the outside for a bit before returning to the ring where Rust worked on the arm of Atlas. The more that Rust worked on it the more Atlas was worn down. Atlas eventually submits to a double arm submission hold by Rust. Match seemed off and Atlas seemed hurt.

Ive been really into Lee Moriarty for a while so this was really fun to get to see him featured in ROH. Big things for this young man to come in the future for sure. The match starts with Homicide and Walters. Good back and forth early on.Homicide tags in Dickinson and Walters tags in LSG.Moriarty and Deppen have a fun little exchange and the match is really getting going.Dickenson hits a Mcully driver amongst confusion to win the match with an assist from Deppen.

The OGK( Matt Taven and Mike Bennett) v.s The Briscoes.

Both teams are legends in Ring Of Honor in my opiinion, I have watched all these men for years and its great to see them still with the company. the Briscoes tried to attack OGK before the match and they had control of the match early on preventing Taven from getting in the ring. Mark almost got disqualified early on on multiple occassions. Briscoes are very determined to get a chair in the ring and while setting up for redneck boogie  but was interuppted by Bennett who saves Taven. jay goes for the Jay driller on Taven but Taven counters it into a roll up for the win.

What a match. honestly there’s so much here to unpack but it was a very technical and beautifully paced match by both men. The Pure division has always been the best example of technical wrestling for ROH and im very glad to see it back in full effect and how well it was displayed here. Gresham retarts the match and it ends up costing him as Josh woods beats him with a really impressive german suplex and Gresham is out cold. Woods is your new Roh Pure champion.

Kenny King attacks Shane Taylor early on and goes for his knee with the chair and really just lays into him with the chair and takes him out of the match where he was replaced with O’Shay Edwards.This match was contested under Lucha Rules. Both Kaun and lee starts the match trading blows back and forth to start. Match was very fun and ended when Shane Taylor comes out while the referee was down on the outside of thie ring and Shane Taylor hits Kenny King in the face with a stell chair to allow Moses to get the pin and retin the ROH six man tag team titles.

This is the final to crown the first ever Ring Of Honor Women’s World Champion. As someone who has been a fan of ROH for over 15 years I can honestly say it is so cool to see them finally have a women’s division going and the work that has gone in by everyone to make it happen. Both woemn wrestled a very fast paced techinical match and Rok- C wins after she hits  a code red onto Alize for the win.

This match starts the way you think it would, lots of high spots between Bandido and Flamita. EC3 get disqualified after hitting Bandido with a steel chair. Flamita and Bandido team up on Brody King until Brody King hits an All Seeing Eye on Flamita to pin him. Bandido wins after a roll up. Bandido is amazing. He is one of the best that ROH has had in a very long time and its great to see how well ROH is doing after nearly 20 years as a promotion.What a great night of wrestling.