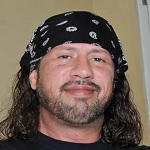 WWE Hall of Famer Sean “X-Pac” Waltman took to Twitter today and posted a new selfie to show off his impressive physique.

Waltman, who turned 49 back on July 13, noted that he’s getting back in shape and has built a gym at his home.

“Getting back in shape. Built a gym here at home, so I don’t have to leave the house to work out every day,” he wrote.

Waltman underwent ACL/MLC/meniscus surgery back in January, and has expressed interest in having one final run once he fully recovers. He once noted that he plans on being back in the ring by January. Waltman appeared on WWE’s The Bump back in July and said he’d like to work with WWE NXT Tag Team Champions MSK, Sami Zayn or Santos Escobar. Escobar responded to Waltman’s new selfie and proposed a match at WrestleMania 38.

“Me and you… #Wrestlemania [fist emoji] [skull and bones emoji] [Mexico flag emoji],” Escobar wrote, in a post that was re-tweeted by Waltman.

Adam Scherr (fka Braun Strowman) also responded to Waltman’s tweet and joked about how Waltman resembles him with the new look.

Waltman joked back, “I miss you son!”

You can see the related tweets below:

Getting back in shape. Built a gym here at home, so I don't have to leave the house to work out every day. pic.twitter.com/mJKQTLDsCJ

I miss you son!