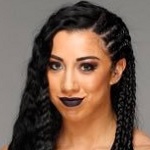 It was noted this week by PWInsider that Indi Hartwell is on the babyface side of the roster from here on out. Furthermore, NXT Women’s Champion Raquel Gonzalez will also be presented as a babyface going forward.

Hartwell recently proposed to Dexter Lumis and their wedding will air during the live September 14 NXT episode. She has essentially split from The Way for the most part.

Gonzalez recently split from Dakota Kai, and retained her title over Kai at the Takeover 36 event earlier this month. Gonzalez is now feuding with Kay Lee Ray, and is headed for a feud with Franky Monet.