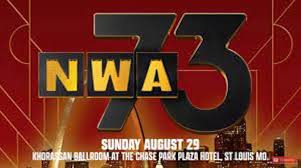 The show starts with a old 60’s style promo.

Storm is out first followed by Latimer and then Crimson. Before Crimson can enter the ring he is attacked by his partner. Latimer takes advantage of this and attacks Tim storm in the ring with a steel chair before the macth begins. Tim Storm recovers and attacks Latimer with a trash can.They continue to brawl outside the ring.Tim Storm gets out a 20ft ladder. Lots of insanity early on.Latimer sets up a steel barrier by the ladder.Latimer does a swanron bomb onto Tim Storm through the barrier off the 20ft ladder. Crimson is back out after being taken to the back earlier.Crimson dropkicks a steel chair into the face of Latimer.Crimson with a death valley driver on Latimer through two chairs set up in the ring.Crimson goes for the cover that in broken up by Tim Storm who has finally recovered from the dive by Latimer on the outside.Crimson and Storm trade blows in the ring and Crimson takes off his belt. Storm gets the refferees belt to trade belt shots with Crimson.Tim Storm wins with The Perfect Storm onto Crimson.

Kylie Rae is out to the ring first to a pretty decent reaction. Mcikie james is out next and is recieving a pretty loud reaction. Great to see her in action this evening.Thank you Mickie chant breaks out.Kylie Rae joins in. Both women are chain wrestling and tading holds. Stand off between both women and they both show each other respect.Mickie with a dive onto Rae from the top rope. Rae with a crossface.Rae goes for a running senton into the corner on Mickie James.Mickie James wins with a Mick Kick. She is then attacked by a masked women who turns out to be Deonna Purrazzo. Kylie Rae checks on Mickie afterwards and then Deonna leaves. They play Mickie’s theme as she leaves.

Tyrus Jordan Cleawater and The Masked Man v.s The Pope and The End.

Parrow starts with Tyrus and then Tyrus tags out to Jordan Clearwater. Parrow tags in Odinson. Odisnon gets in some hits before tagging in Pope.Pope with a double blockbuster onto Clearwater and the masked man. Tyrus with a cheap shot on Pope.Odinson gets in with some clotheslines on The Masked Man. Tyrus gets tagged in and begins to takeovet the match and dominate Odinson. Odinson tags in Parrow after being held in the oppsosing teams corner for a while.Tyrus with a heart punch.The Masked Man with the pin on Odinson for the win.Tyrus does not like the fact that he did not get the pin.

Storm is out first.Strom looks great in his return to the NWA.Adonis is out next.Both men lock up to start the match.Storm and Adonis fight on the outside of the ring and Storm gets in some shots while he has Adonis on the barrier and plays to the crowd.Storm gets Adonis on his shoulders and Adonis gets down and runs Storm into the ring post. Both men back in the ing and Adonis has control of the match.Adonis runs Storm into the corner turnbuckles but Storm is just getting fired up. Storm with a series of clotheslines onto Adonis.Adonis recovers and goes up top where Storm stops him and hit him with a frankensteiner. Storm hits the eight second ride for a close two but Adonis kicks out.Storm sets up for the superkick. He goes for it but Adonis blocks it for a spinerbuster and a near fall that Storm kicks out of at two. Adonis with the masterlock.Storm begins to fight back. Adonis with a full nelson slam for a near fall.Adonis grabs Storm’s beer. The ref  takes the beer and Adonis turns into a superkick by Storm and a three but Adonis got his foot on the rope so the match continues. The crowd is chatting “ref you suck” and Adonis uses the ropes to pin Storm. Adonis is celebrating and takes off to the back because he knows he stole one from Storm. Storm is heated. The crowd is not happy eihter and Storm is still in the ring while the fnas chant “Thank you Cowboy”

Ric Flair segment. Ric Flair is out to a loud reaction from the crowd and he looks great and happy to be there. he starts off by saying thank you to the crowd.Flair says he wont cry yet and he will wait to the end.Flair is out here to say thank you and I wont sum it up but this promo needs to be seen.

There’s a suprprise 13th man and it is Judais who is with Father James Mitchell. This match is about what you would expect. lots of corner spots and playing to the crowd. Really cool seven man suplex in the ring and a razor’s edge by Judias to the outside.Its down to JTG, Luke Hawks and Judias. The final two men are JTG and Judias. Judias wins after a back and forth with JTG on the outside second rope. He wins by hitting a springboard clothesline to JTg to send his to the outside for the win and a shot at the NWA National Championship in the future.

Chelsea Green makes her way to the ring. Great reaction from the crowd for her. Kamille is out next and the match begins.Great start to the match with both women gaining the advantage over the other.Kamille gains control of the match and begins really working on Green’s left arm and previously injured wrist. Kamille with a torture rack and Green fights out of it.Green gets the upper hand for a moment but Kamille hits a version of Matt Cardona’s radio silenece for a near fall.Kamille reverses a killswitch and gets the submission locked in and forces Green to tap out to retain her NWA Women’s World Championship.

Konnan is out with La Rebelion’ to a loud reaction from the crowd. Great suprise to see him with the challengers.Kratos starts the match with Bestia666. Mechawolf is in the ring after a tag from Bestia666. Kratos being dominate early on. Underhanded tactics by La Rebelion’ and a distraction led to the finish by La Rebelion’ with their finisher the mark of the beast onto Aron Stevens. Konnan cuts a pormo on inclusion and how happy he is to be a part of all the different promotions working together and when he started it wasnt like this. Puts over the NWA and the crowd cheers.Fite TV was experiecing issues during this match. Worth checking out as it was a very steady but fun match despite the technical issues.

The main event is next for the NWA World’s Heavyweight Championship. Trevor Murdoch is out first after a promo about how we got to this point and that Trevor Murdoch has put his carrer on the line.Trevor Murdoch is wearing a jacket that is very simliar to one worn by the late great Harley Race. Nick Aldis is out next and the commentators put over tha fact that this is his 1,044th day as champion. We go to the ring for introductions. Big reaction for Murdoch when he is announced as being from St. Louis. Referee Robert King goes over the match rules and significance of the match and the building they are in for it.Murdoch goes to give his ring jacket to his family and is jumped from behind by Aldis. Both men begin to brawl out in the crowd and the match has not yet begun as the bell has not rang yet.The fighting has made its way onto the stage and Aldis it trying to go for a suplex but is stopped by NWA officials.He is then stopped by Billy Corgan after laying Murdoch out on the ramp. He tries to intimidate Billy Corgan and NWA officials. Spinebuster on the ramp by Aldis. They make their way to the ring after a brief trading of blows and then tthe bell rings and the match begins. Aldis with an olympic slam onto Murdoch. Velvet Sky brings up his time in the main event mafia in TNA Wrestling in 2008 and paying homage to Kurt Angle.Murdoch throws Aldis off the top rope.He goes up top for the bulldog but Aldis counters it for a quick two count. Murdoch with a figure four leglock.Murdoch really cranking on the legs of Aldis.Murdoch lets go of the hold and chrges after Aldis who dodges him and runs into the turnbuckle.Aldis with an octopus stretch and keeps Murdoch in it for quite a bit.Aldis shoves the Referee and he shoves Aldis back and Murdoch takes out the referee by mistake and a low blow by Aldis while the referee is down and Aldis goes to the outside to taunt Murdoch’s family and provoking his son.Aldis really punishing Murdoch on the outside and takes out the timekeeper.He sets up a table and puts Murdoch onto it and goes to the top rope while the table is set up outside.Elbow drop by Aldis to the outside onto Murodoch through the table. There’s a new referee out to count the pin by Aldis but Murdoch kicks out at two.The commentators cant believe it and neither can Aldis. Code red by Murdoch for a near fall.Both men are down.Murdoch is up first and goes to the tope rope but Aldis cuts his off at the pass and stops his midway up. Aldis with a tombstone piledriver. Aldis wtih a top rope elbow drop for a very close two but Murdoch kicks out and the match continues. Aldis is up on the top rope and Murdoch with a few chops and hits a superplex from off the top rope.Murdoch is up and goes to the top rope. he misses the bulldog. Aldis with the kingsman cloverleaf. Murdoch makes it to the ropes.Both men trade blows in the center of the ring. Murdoch with a piledriver.Murdoch hits the top rope bulldog to pin Nick Aldis and become the new NWA World’s Heavyweight Championship. Ric Flair is out to celebrate and shake his hand and to congratulate him on winning and says he earned it. Murdoch celebrates in the ring with his family. This ends the 1,044 day reign of Nick Aldis. Murdoch cuts a post match promo thanking the fans for keeping him going and believing in him and thanks Harley Race and closes by saying hes going to represent the title to the best of his abilities and says thank you. The commentators thank us for watching and say they will see us on Thursday for NWA Power as we go to a close.