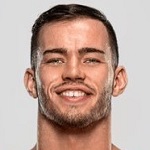 The first match saw Cal Bloom defeat Austin Theory. Bloom is the son of former WWE and AWA star Wayne Bloom, known to fans as Beau Beverly of The Beverly Brothers. He signed with WWE in March 2019. Theory has been away from the NXT storylines since walking out on The Way earlier in the summer.

The second match saw Xia Li and Kacy Catanzaro defeat Aliyah and Dakota Kai. Catanzaro and Kai have been in action as of late on NXT TV, but Aliyah and Li have been away amid rumored main roster call-ups in the near future.

Below are a few photos from the pre-show and post-show dark matches:

Final #SmackDown insider report of the night. Dark match. Finn Balor and Street Prophets vs. Roman and the Usos. pic.twitter.com/o86E4gbX3M