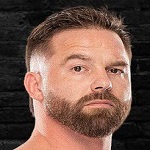 AEW star Cash Wheeler took to Twitter to reveal graphic photos from the gruesome injury he suffered back on July 28 as FTR were facing Santana and Ortiz on AEW Dynamite.

As noted back when the injury occurred, FTR was attempting a superplex/splash combination, with Wheeler doing the splash, but Santana broke the spot up and sent Cash from the top to the floor. He hurt himself on the way down on the ring post, and the match abruptly ended a few minutes later as Dax Harwood got the pin for FTR. Wheeler was tended to at ringside while bleeding heavily. He has been out of action since then.

In an update, Wheeler noted on Twitter that he’s been dealing with loss of grip strength, and loss of feeling/nerve damage, since then. He noted that he’s also wondering if it’s worth it anymore, which sounds like the recent storyline comments Harwood has made.

There’s no word on when Wheeler will be back in action, but we will keep you updated. You can see the graphic photos he revealed below:

August 28th I had a hook stab into my arm and rip it open. For almost a month I’ve been dealing with loss of grip strength, loss of feeling/nerve damage, and wondering if this is even worth it anymore. If this is the end, we’re taking a pound of flesh with us. pic.twitter.com/A0xpLkX8zG