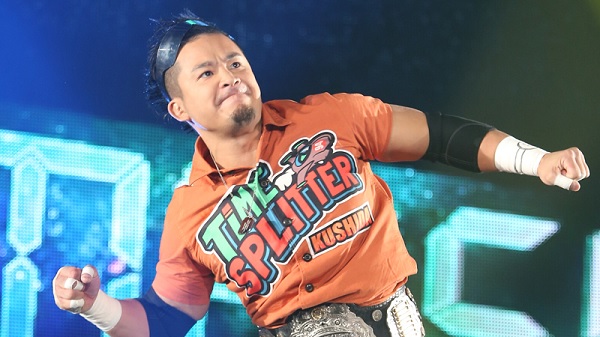 WWE NXT Cruiserweight Champion Kushida is no longer medically cleared to compete, and will not be defending his title against Roderick Strong on tonight’s Takeover 36 go-home show.

NXT General Manager William Regal took to Twitter this evening and announced that Kushida underwent a medical examination, and it was determined that he is not cleared to compete tonight.

Regal also announced that NXT will open with a Diamond Mine Open Challenge as Strong and Malcolm Bivens expressed Strong’s desire to compete when informed of Kushida’s status.

“Unfortunately after a medical examination, officials learned @KUSHIDA_0904 is not cleared to compete tonight. When I informed @Malcolmvelli and @roderickstrong, they expressed Roderick’s desire to compete. Therefore, #WWENXT will begin with a #DiamondMine open challenge,” Regal wrote.

This will be the first appearance for The Diamond Mine as a group since Tyler Rust was released earlier this month along with other NXT cuts. The group now features just Bivens as the manager, Strong as the in-ring competitor, and Hachiman (Hideki Suzuki) as the coach. It remains to be seen if they will add a new member to replace Rust.

There’s no word on why Kushida is out of action, or when he will be back, but we will keep you updated.

In other news for tonight’s NXT episode, it’s been announced that a Prime Target special for Kyle O’Reilly vs. Adam Cole at Takeover 36 will air. As noted, the 2 of 3 Falls match between Cole and O’Reilly will start as a standard fall won by pin or submission (chosen by O’Reilly), and the second fall will be a Street Fight (chosen by Cole), and the third fall will be held in a Steel Cage (chosen by Regal), if needed.

Below is the updated line-up for tonight’s NXT show, along with Regal’s tweet:

* The Diamond Mine Open Challenge will open the show with Roderick Strong in action. NXT Cruiserweight Champion Kushida is not cleared to compete, and will not be defending against Strong tonight

* Prime Target preview for Adam Cole vs. Kyle O’Reilly at Takeover 36 will air

* The go-home build for Takeover 36

Unfortunately after a medical examination, officials learned @KUSHIDA_0904 is not cleared to compete tonight. When I informed @Malcolmvelli and @roderickstrong, they expressed Roderick’s desire to compete.

Therefore, #WWENXT will begin with a #DiamondMine open challenge.