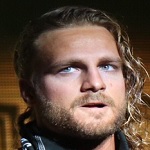 AEW star “Hangman” Adam Page is reportedly away from the storylines on a planned absence right now.

Page vs. Omega for the title had been rumored for All Out, but it was announced this week that Christian Cage will challenge Omega for the strap at that pay-per-view.

Page appeared on last week’s Homecoming edition of AEW Dynamite and apologized to The Dark Order for losing the six-man match, which saw Omega pin him for the win. Page also said he needs to quit relying on The Dark Order to have his back, and that he needs to take a break from being their friend. He walked off and later in the show was attacked by The Elite. Page was beat down until The Dark Order ran out, but were stopped from making the save by Evil Uno and Stu Grayson, due to Page’s order from earlier in the show. That segment ended with Page taking a belt shot to the face from Omega, while The Young Bucks held him up.

In an update, Page did not appear on this week’s Dynamite from Pittsburgh. PWInsider reports that the plan was always for Page to take some family time off in advance of his first child being born.

Page, who turned 30 back on July 27, took to Twitter in early June and announced that he and his wife Amanda are expecting their first child together. They have been married since 2016.

There is no word yet on when Page’s wife is expected to give birth, or when Page will return to the AEW storylines. He is not included in promotional graphics for the AEW Fan Fest scheduled for All Out Week in early September, but he is on the poster for the September 22 Grand Slam edition of AEW Dynamite in New York City.