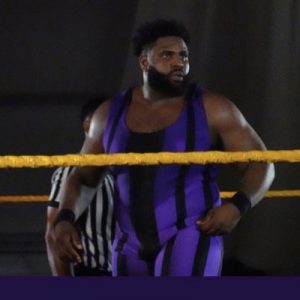 – In June 2018, Palmer attended a WWE tryout
– In February 2019, he was hired by WWE and assigned to the WWE Performance Center in Orlando, Florida for training.
– In May 2019, Palmer set a 800 lb trap bar deadlift record at the WWE Performance Center Combine, beating the previous record of 775 lbs held by Otis.
– He wrestled his first match on November 7, 2019, losing to Dexter Lumis at a house show in Ocala, Florida under his birth name.
– After a pandemic-induced absence, Palmer returned to action on a pre-Smackdown dark match in July 2021, competing as ‘Odyssey Jones’ against Robert Roode
– In a dark match prior to Takeover: War Games 2021, Jones defeated Andre Chase